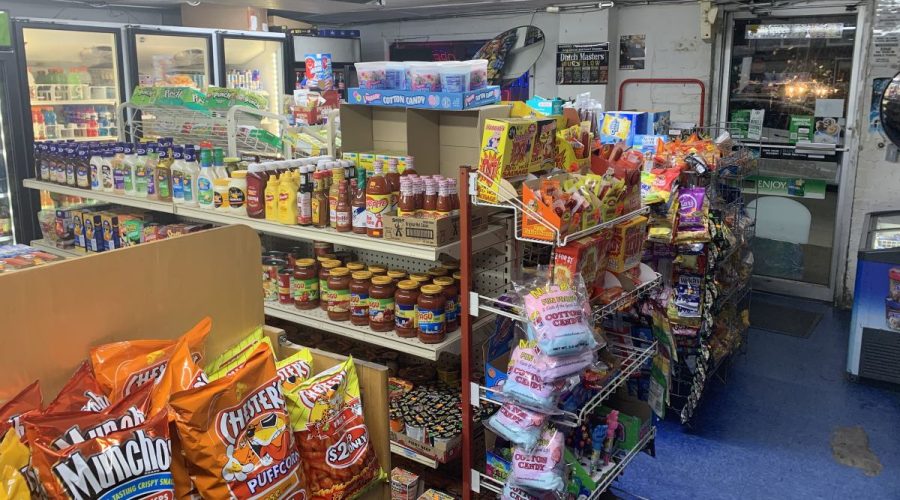 ROCK HILL, S.C. — The closest grocery store to the Sunset Park neighborhood is a Food Lion seven miles away. That’s why Magloire Lubika wants to bring fresh meats, fruits, and vegetables to the shelves of his newly reopened space, Surefire Neighborhood Market.

Magloire Lubika, 26, grew up spending time at his parents’ West Boulevard convenience store, Jermain Express, in Charlotte. His parents, who immigrated to the United States from Congo, owned the store for about ten years before they opened a second store in South Carolina.

Now, Lubika plans to carry on the family business and expand it with Surefire Neighborhood Market, a convenience store located in Rock Hill, S.C. He wants to source healthy and nutritious food for people in the neighborhood. Many of whom, according to Lubika, travel by foot.

This wasn’t always his plan, though.

Initially, Lubika wanted nothing to do with his parent’s business. “I hated the store,” he said.

But then, his mother encouraged him to think of ways to reimagine the store. This interested him. Lubika and his brother spent two years planning before taking over the store and renaming it Surefire, which means to succeed.

While Lubika has since closed his family’s Charlotte location and still feels deeply connected to the West End neighborhood he grew up in, he sees a need in Rock Hill that he believes fits his strategic plan to grow the business.

Lubika and his brother closed the Rock Hill store for three months to implement changes needed to add healthier options. After seven months of running the new store, Lubika spoke with QCity Metro about how the changes are going and what he’s learned so far.

Responses have been edited for clarity and brevity.

What happened during the three months the store was closed?

I would say it was kind of a smooth process. It’s an idea that we have had for about two years. We already knew how to set funds aside to get this project underway, so there wasn’t too much worry. The only setback was permitting our kitchen space, which I think will be the biggest key factor with our Surefire project model. We’re just waiting for that to get approved by the city, which has been understaffed for some time now. So getting these things approved has taken some time, unfortunately.

We’ve probably been in our soft opening for the past six months. Our full opening will be once we get our kitchen back and open. So we’re looking forward to that; that’s going to be another huge aspect that will play an important role in having that healthy and affordable food here in the city.

How has business been since the renovation?

Renovating the kitchen space [has been difficult]. I think it will set us apart from other convenience stores in our area. Our customers know us for having food here. They’ll come in here and get very frustrated, like, “You guys still don’t have the food” and so having people be disappointed is probably the hardest part. Everything else has been pretty smooth and about learning which I appreciate.

How have the customers responded to the changes?

They appreciate the idea of providing groceries in our community. When you think about it, we can be that one-stop shop for people, so we’re building on that. It’s been a big change – just seeing how our customers operate in a new space and learning them. It’s been great. We’re constantly continuing to work on top of that and just learning our customer’s buying habits.

Were you worried about making the change and your customers not being receptive?

Yeah, most definitely. I was very hesitant. I’m not like a nutritionist or anything, but we are bringing on staff soon to help us. There’s always been a negative connotation around Black people and eating healthy, and convenience stores aren’t [usually] a healthy alternative. There was a bit of hesitancy there. I was thinking, “If we switch this out for fruits and vegetables, how will people feel?”

Did anything surprise you?

Plums were the number one selling product among everything, which was surprising; we just couldn’t believe it. So we thought, “Okay, this is what the community needs.”

What suggestions have you heard from customers about Surefire’s products?

[People want] more seasonal fruits and vegetables. People also want more frozen foods they can buy here, easily take home, and make for their families. One thing that somebody brought up — which is why we’re trying to bring a nutritionist on — is having labels on products that say what health benefits those products have. So we’re going to start putting stickers on products that’ll say, “This one will help if you need more iron in your body,” and stuff like that.

What are the price ranges of items in your store?

We competitively price our items. We look at Food Lion, Harris Teeter, and even Family Dollar. Family Dollar’s prices are close to ours. Many of them would be at the same price point — if not, maybe 10 cents more. With our groceries, the margins we work on are like 23% margin. Something that’s $2 elsewhere may be $2.15 or $2.20, so nothing too much.

What’s the biggest thing you’ve learned throughout this process?

[I’ve learned about] being a better leader. I’m just constantly learning how to become a better CEO. I’m only 26, so I want to learn as much as possible to prepare 36-year old me. I’m learning and understanding the value of networking and connections and building discipline because it will pay off in the end.