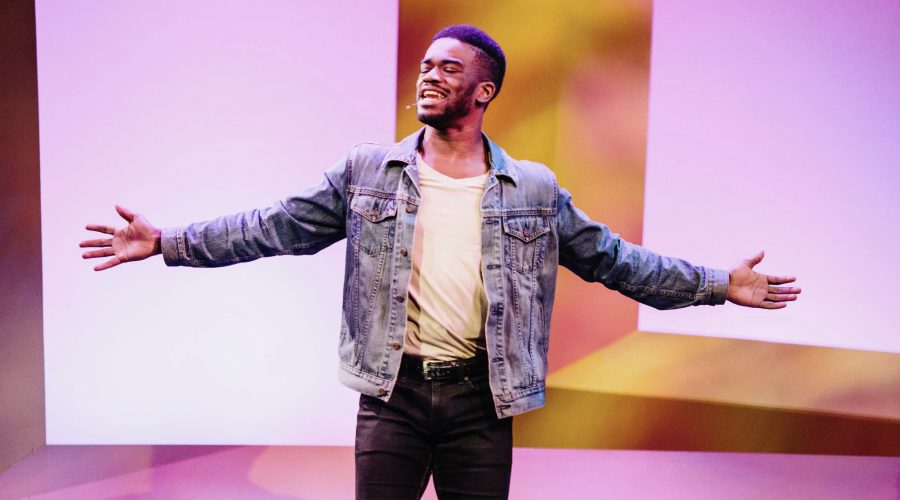 For Treston Henderson, being an actor in the touring Broadway musical “Ain’t Too Proud: The Life and Times of the Temptations” is a dream come true.

The 23-year-old Oak Ridge, Tennessee, native grew up listening to the music of the legendary vocal group.

“My grandmother and my mom would play it around the house all the time,” he told QCity Metro in a recent interview. “Songs like ‘My Girl,’ ‘Just My Imagination,’ ‘Get Ready’ [and] ‘Shout,’ especially.”

Now Henderson, a swing — aka understudy — has to learn the lines of four characters associated with the Temptations:

Henderson said he has learned to pace himself by focusing on learning each role after the next until he is confident in all of them.

Just like his other cast members, Henderson must be at the theater every night, prepared to perform.

“You never know when you will go on. You have to always be ready to go on for any character that you understudy at any time,” he said.

Henderson’s journey to acting started in high school when he tried to balance running track and performing in theatre. But a scheduling conflict his sophomore year forced him to choose.

“I had been running track for 12 years, and I knew I wouldn’t do it in college,” he said. “[Theater] was something new, so I chose it.”

He performed in more than 16 shows across the country throughout his time in school, including classic musicals such as “Hairspray,” “West Side Story” and ‘Grease.” But by the time he graduated from Austin Peay in 2020 amid the Covid-19 pandemic, those acting jobs had dried up.

In May 2020, Henderson participated in a “TypeCast” TikTok challenge, where he posted images from some of his past performances and invited people to suggest what theater roles might work for him.

“Anyone in ‘Ain’t Too Proud,’” someone commented on TikTok.

Henderson responded by calling “Ain’t Too Proud” his “dream show,” and he posted a video of himself singing a snippet of “Shout.”

Two months later, the video caught the attention of a cast member of the show who reached out to him about upcoming auditions in New York City.

“I immediately knew it was no one but God who aligned that,” he said.

He went to the auditions but didn’t go for a specific role; he wanted to be placed where he would best fit the production. Then, after an almost year-delay caused by Covid, he got a called back to join the cast in October 2021.

Henderson said he wasn’t disappointed when cast as a swing; he was thankful to simply be a part of the show.

“We never know why casting do what they do…” he said, adding that being a swing “meant I got to play more than one character and work on developing each individual person.”

“Ain’t Too Proud” began its tour in December and will be at the Belk Theater in Charlotte from Jan. 18 through Jan. 23.

While the opportunity hasn’t come yet, Henderson said getting a chance to take center stage would bring his journey full circle.