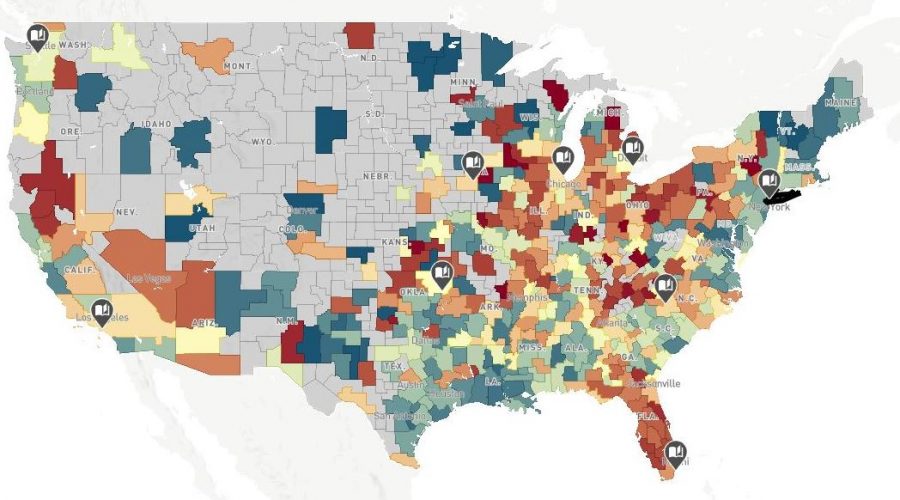 The 2014 study that said the Charlotte area had the worst economic mobility among the nation’s largest 50 metro areas has been updated, with new information that gives insight into why Charlotte ranked so low. It also has surprising data that shows that Mecklenburg County isn’t as bleak as previously thought.

The original “Land of Opportunity Study,” led by a team from Harvard and the University of California-Berkeley, tracked the tax returns of 40 million children and their parents. The study examined children born in the early 1980s to see how they fared in their early 30s by examining tax returns through 2012. The main question: How many children who grew up poor moved to the top quintile or top 20%?

The report found that the Charlotte commuting zone, which includes three counties in South Carolina and six in North Carolina, was at the bottom. It became a rallying cry here for governmental and civic leaders, who were embarrassed by our poor showing. How could a city with so much apparent wealth do so poorly by its most vulnerable residents? Charlotte leaders responded with the Charlotte-Mecklenburg Opportunity task force, which came up with 91 recommendations to improve economic mobility here.

Since then, the study has been updated with tax returns through 2015. And the same research team that did the original study matched the new information with census data to see how different racial and ethnic groups fared, as well as immigrants and native-born residents – information that wasn’t available in the 2014 findings.

In the Charlotte area, there is more mobility when looking specifically at Mecklenburg County as opposed to more rural counties that were included in the original study, like Chester County, South Carolina.

And Mecklenburg County fares better when looking at mobility based on individual incomes instead of household incomes. The original 50 out of 50 study looked at household income.

She said the updated data is important because it lets cities understand what groups are falling behind.

For example, the original study gave high marks to less diverse areas like Pittsburgh while areas like Charlotte that are more diverse ranked lower. The Pittsburgh commuting zone – a Census designation of connected counties – had the second-highest economic mobility in the study, but when you look closely at how different racial groups do in Pittsburgh, there is a large disparity.

For example, in Mecklenburg County, 7.1% of Black children whose parents were in the 25th percentile moved into the top 20% based on individual income. If you look at all the counties in the study, the national median is 7%. In Allegheny County, home to Pittsburgh, it’s 6.7%.

The new data also shows that Mecklenburg County’s mobility rate for low-income Black residents is one of the highest rates of people moving from the bottom to the top among urban counties in the South based on individual incomes. It’s higher or the same as many of the largest urban counties that were part of the 50 out of 50 rankings. They include the home counties of Nashville and Atlanta, and several counties in Florida, such as the homes of Jacksonville, Orlando and Tampa.

The mobility rate in Mecklenburg County is higher than the counties that are home to Austin, Texas, and several cities in the Midwest, such as Cleveland, Dayton, Indianapolis, Cincinnati, and Pittsburgh.

The updated study said that the average individual wage for Black residents who grew up poor in Mecklenburg is $20,000. The national median for all counties in the study for low-income Black children is also $20,000.

“I guess you celebrate small victories,” said Teddy McDaniel, head of the Urban League of Central Carolinas. “But let’s back up on that data.”

He is concerned about the different rates of mobility among different races in Mecklenburg County. Again, 7.1% of low-income Black residents made it to the top income bracket, whereas 10% of Latinos and 12% of white residents did.

That gap between white and Black residents is smaller than in a lot of cities in the 50 out of 50 rankings, but it’s still a sizable gap.

“You wanted to be at a place that feels fair and equitable and a place where people of all walks of life can get the best out of what they want,” he said.

Mobility based on household income

When you move from individual incomes to household incomes, Mecklenburg County fares worse. Only 2.6% of low-income Black households in the county reach the top 20%. The median for all counties in the study is 3.3%.

That is the same or higher than a few counties that are home to cities like Nashville, Jacksonville, as well as places in the Midwest, like Cincinnati, Cleveland and Indianapolis.

And household income is also much lower compared with other counties. The median national household income for Black residents who grew up poor is $24,000 a year. It’s $21,000 in Mecklenburg County.

Brown University economist John Friedman, who worked on the study, said one reason for Charlotte’s gap between individual incomes and household incomes is a low rate of marriage.

In Mecklenburg County, 22% of low-income residents were married by age 35. The median for all counties in the study is 42%.

Marriage rates are lower in cities than in rural areas. But Mecklenburg’s marriage rate is lower than a number of counties, including those that are home to Houston, Dallas, Los Angeles, Chicago, Raleigh, Miami and Boston.

“Even if the second earner earns the minimum wage, you could make $15,000 at a minimum wage job,” she said. “We’re not going to find a government program that provides families with an extra $20,000 a year.”

Despite the new data that paints a slightly better picture of mobility here in some instances, Charlotte’s 50 out of 50 ranking spurred the city and county to mobilize resources to improve economic mobility.

United Way of Central Carolinas Chief Executive Laura Yates Clark said the city might not have worked hard had it not been last.