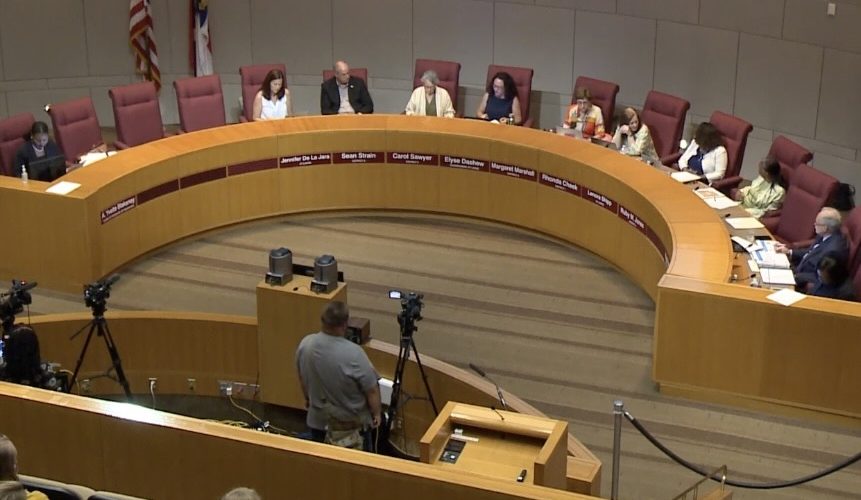 Mecklenburg voters swept three incumbents from the county’s school board, returning only one — Thelma Byers-Bailey — for another term.

Gone from the next school board will be incumbents Rhonda Cheek (District 1), Carol Sawyer (District 4), and Sean Strain (District 6).

Byers-Bailey (District 2), will retain her seat after winning a tight, three-person race.

Eighteen candidates were vying for six district seats on the Charlotte-Mecklenburg Board of Education. District 3 and District 5 were up for grabs as incumbents Ruby Jones and Margaret Marshall did not seek re-election.

The school board’s three at-large seats — held by board chair Elyse Dashew, Jennifer De La Jara and Lenora Shipp — were not on the ballot this year.

School board races in Mecklenburg County are nonpartisan.

The next school board will face some immediate challenges. With five of its nine members newly elected, the board must find a new superintendent to lead Charlotte-Mecklenburg Schools, which is still feeling the academic impact of the pandemic lockdown, which sent CMS students into remote learning.

The new board also will be under pressure to address low-performing schools and forge closer ties with county government, which, in the current fiscal year, allocated almost $558 million for CMS operations — a sum viewed as insufficient by some CMS advocates.

New members will be sworn in on Dec. 13.

District 1 covers portions of north Charlotte, including schools in Cornelius, Concord and Huntersville.

Cheeks was elected to District 1 in 2009. As the board’s longest-serving member, she had three children graduate from CMS throughout her three terms.

Fisher, pastor of Life Center International, is a member of the Mecklenburg County Task Force to Stop the Violence and the Village Heartbeat Initiative

Easley joins the school board with 14 years of teaching experience, having spent 10 years as a CMS science and social studies teacher. She is also the mother of two current CMS students.

Easley has been a strong advocate for educators; she is co-founder of North Carolina Teachers United, the largest pro-public education support and resource group in the state.

She is also a member of the state and county association of educators, since 2018.

During her campaign, Easley said she would advocate for better teachers and more resources for low-performing schools.

With 42.1% of the vote, Byers-Bailey retained her seat representing west Charlotte, holding off challengers Juanrique Hall and Monty Witherspoon.

Hall is a West Charlotte High School alum and a volunteer football coach at the school. He works with the Charlotte-Mecklenburg Alternatives To Violence program.

Witherspoon is a minister who ran for school board in 2019.

Byers-Bailey, 79, resumes her role for a third-term since 2013. She is the board’s current vice chair, a role she has held for three years.

Byers-Bailey is also involved in the community. She is president of the Lincoln Heights Neighborhood Association, serves as a member of the Friendship CDC Board of Directors and the African American Community Fund’s Board of Directors.

She has served as an afterschool math tutor for fourth- and fifth-grade students.

Rushing was a first-time candidate and CMS parent who runs a transportation service that takes students to and from charter schools that don’t offer busing.

Rankin is a Charlotte native and a current CMS parent. He has taught in CMS, as well as in local charter and private schools. He currently runs a youth development program called Future LEADERS, a mentorship program for local youth.

Witherspoon is a former CMS graduate and a retired CMS educator.

Sawyers, who served five years on the board, is chair of the board’s Policy Committee. She received backlash in her district over her decisions regarding pandemic safety and LGBTQ student and teacher rights.

Sneed is no stranger to the campaign trail; she ran for school board in both 2017 (District 4) and 2019 (At-large) but failed to win a seat.

Sneed told QCity Metro that she is not affiliated with Moms for Liberty and did not seek the group’s endorsement.

Sneed said she plans to help the board set “aggressive, measurable and equitable goals” in order to address the academic achievement gap in Black and brown students, a demographic that makes up a vast majority of her district.

Lisa Cline defeated Trent Merchant with 51.6% of the votes.

Cline is a retired educator of more than 39 years of experience. She is also a former CMS parent who has volunteered in PTAs in multiple schools throughout the district.

Merchant is a former at-large CMS board member and served in that role from 2006 until 2011.

District 5 encompasses portions of south Charlotte and Matthews. The demographic is predominantly white, with families who have moved their children away from CMS into private schools.

Cline told WFAE that her mission is to bring those families back into the district.

Summer Nunn will represent a district that includes south Charlotte, Pineville, Matthews and Mint Hill. She won 43.4% of the vote against incumbent Sean Strain and Michael Watson.

Nunn is a marketing executive with a car wash chain and says her business experience and connections will help the board hire a new superintendent and address academic issues.

Watson has volunteered to serve on PTAs and school leadership teams for several years.

Strain was elected to the school board in 2017. He was a vocal member in the hiring and firing of former superintendent Earnest Winston. He has received public backlash for his alleged ties with Moms for Liberty and was accused of stealing campaign signs on Monday that referenced the group’s endorsement of his campaign.