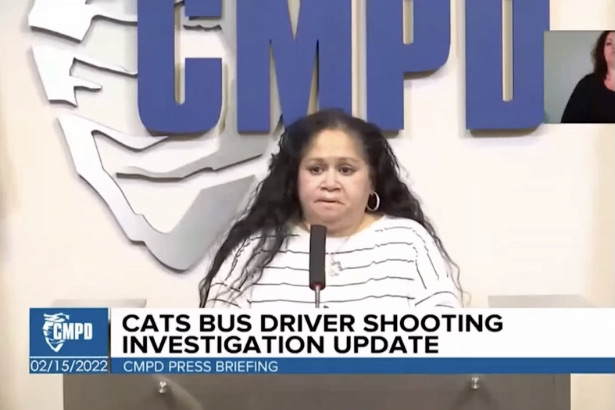 The mother of Ethan Rivera, the Charlotte Area Transit System (CATS) driver who was shot and killed last week while driving a city bus, appealed to the public on Tuesday as the police continued to search for her son’s killer.

“This animal has to be taken off the street,” Sylvia Rivera said at a Charlotte-Mecklenburg Police Department news conference. “If it happened to my son, your child could be next, because this person didn’t seem to care who Ethan was or who he was leaving behind.”

According to CMPD, Rivera was shot around 9:30 p.m. Friday in what the authorities suspect was a case of road rage. The shooting happened in uptown Charlotte, in the 500 block of West Trade Street.

Rivera, a 41-year-old father of two, died at a hospital the next day.

“Ethan was a good man,” his mother said. “He was coming into his own.”

CMPD on Tuesday released photos of the suspect and his vehicle.

Police Captain Joel McNelly said the shooter — a man with light-brown skin and a mustache — was driving a 2003-2005 black Honda Pilot.

McNeely said the SUV’s backup lights are large squares on both sides of the license plate. The SUV also has running boards along each side.

“[Ethan’s family] is heartbroken. They’re mourning, and they deserve for someone to come forward and solve this,” McNelly said.