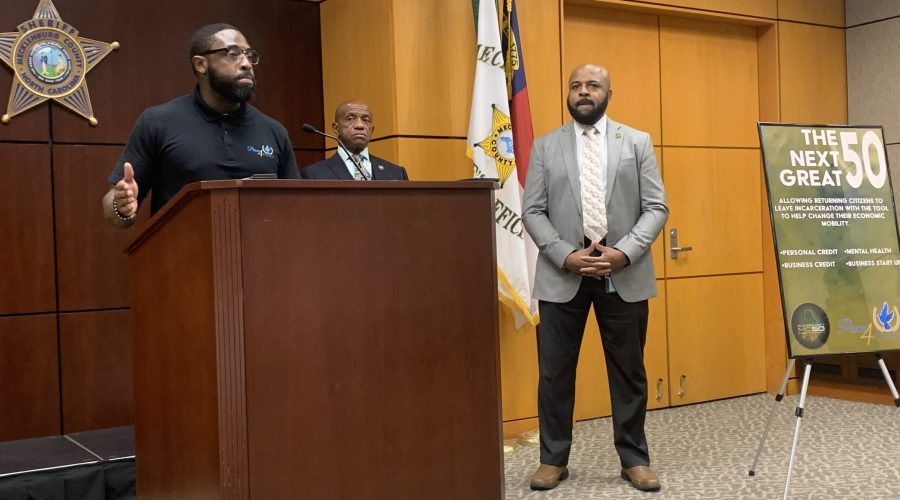 A Black-led nonprofit will partner with the Mecklenburg County Sheriff’s Office to teach financial literacy and entrepreneurship to people incarcerated within the county’s detention centers.

Under the Next Great 50 Entrepreneur Initiative, selected inmates will get eight weeks of training to improve their credit scores and gain the skills they need to start their own businesses once they are released.

The program is operated by Peace4Poverty, a Charlotte nonprofit founded in 2020.

“We have to have the resources or a door to point to once they leave this building,” McFadden told reporters Monday at the Mecklenburg Detention Center. “There is very little hope out there because we do not accept our returning citizens like we should.”

At age 22, he was convicted of first-degree burglary and sentenced to 12 years in prison, where he earned a business degree. He was released in 2018 and later started two companies — a trucking business and a clothing business.

Now 38, Proby said he wants other ex-offenders to be better equipped than he was.

“It’s my duty to be able to reach back and give everybody the opportunity to not get out at a disadvantage, but with an advantage,” he told QCity Metro.

Proby said the nonprofit’s seven-member board includes financial advisors, credit specialists and business consultants, all assisting in the initiative.

The program has multiple components, with mental health support being a focus in the first two weeks.

“There’s no need to teach our community or returning citizens or anybody for that nature about money or business structure if their mindset hasn’t changed,” he said.

At least 150 inmates have signed up for the program, Proby said, but only 12 are accepted at any one time.

He said the high demand for the program proves that returning citizens “want to do better.”

The first class begins in the detention centers on Oct. 10.