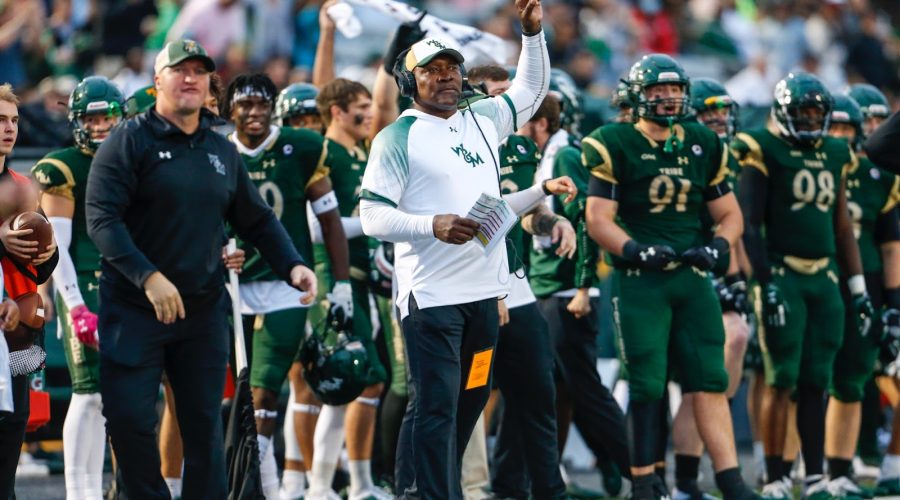 Brown, 57, takes over as the school’s 22nd head coach after the school parted ways with Sam Washington in December. He is the third in the last five years.

He takes over rebuilding a program after losing a number of starters who transferred this offseason. NC A&T will also join the Colonial Athletic Association in the fall, its third conference change in the last three years.

“Having a chance to look at the A&T program and the talent level, I believe we will be able to step into the conference and be extremely competitive, “ Brown told reporters in his introductory press conference Monday. “There are a lot of talented players in this program.”

Who is Vincent Brown?

The Atlanta native was a standout linebacker at Mississippi Valley State, where he earned all-conference honors for three seasons.

In college, he earned the nickname “The Undertaker” because his tackles looked as if he had buried his opponents into the ground.

In 1988, Brown was drafted in the second round by the New England Patriots where he spent his entire 8-year career, becoming a three-time All-Pro linebacker.

Brown has spent the past four seasons in Virginia as William & Mary’s associate head coach, defensive coordinator and linebackers coach.

In 2022, he led the Tribe to an 11-2 record. The team won a share of the Colonial Athletic Association conference title and reached the NCAA Division I-FCS playoff quarterfinals.

His defense led the country in multiple stats last season. The Tribe led the nation in fumble recoveries (15) and ranked sixth nationally in turnovers gained (25).

William & Mary also had the sixth-best third-down defense in the country, allowing opponents to only convert 31.5 percent of their third-down opportunities. The Tribe’s defense topped the CAA in third-down defense, fumbles recovered, red zone defense and turnovers gained.

Brown has also coached at other collegiate programs, including Howard, Connecticut, Virginia and Richmond. He even spent a season as an assistant coach with the Dallas Cowboys.

“I knew that there was one man who had the experiences, the integrity, the character, the relationships, the leadership, and the vision that we needed in order to move successfully into the Colonial Athletic Association as a football program,” Athletics Director Earl M. Hilton III told reporters.

“In my unguarded opinion, Coach Brown checks a lot of boxes for us.”