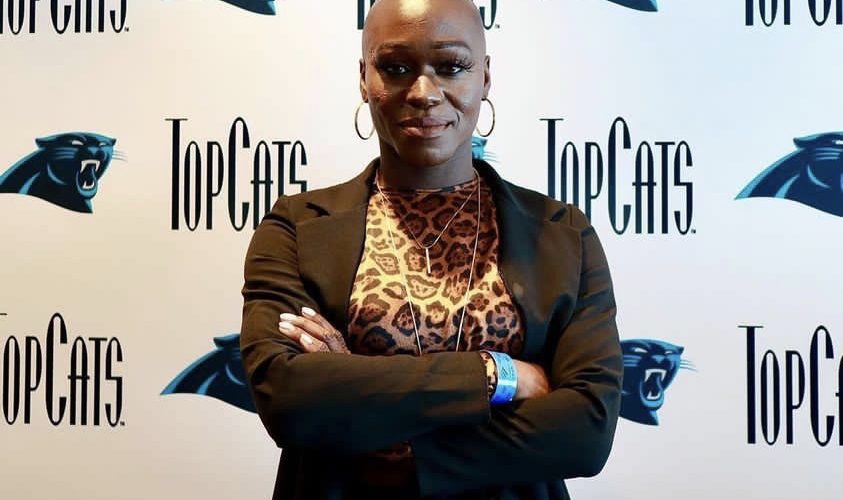 Justine Lindsay has long had a love for dance, but little did she know she would one day make history.

The 29-year-old is the newest member of the Topcats, the Carolina Panthers’ cheerleading squad — and she’s the first openly trans NFL cheerleader.

The Charlotte native said that when she made the squad, the magnitude of her accomplishment didn’t fully dawn on her, not until she began writing a caption to share the news on Instagram.

Having grown up in the church, Lindsay said, her faith in God propelled her to where she is today. She is proud that she is able to not only continue his dancing career but do it while being herself.

QCity Metro spoke with Lindsay about her love for dance, her time at JCSU and the impact she is making on and off the sideline.

Answers have been edited for clarity and brevity.

When did you decide to come out?

My parents and family already knew what it was when I was kid. They didn’t put me in a situation where they were forcing me to go play with your trucks and stuff like that. They just wanted to just see which avenue I was going to go into and then whatever the avenue was, grow into it. And when I was ready to express to them my feelings and who I am, then they were ready to sit down with me.

I came out to them at 12 years old but I transitioned at 17.

When you transitioned at 17, how was the public reception from people around you?

I just remember not getting support from other trans women because in the society that we live in right now, everybody is just for their own. They want to look good. So, they aren’t gonna really tell you how to get yours or help you. So I didn’t really have that support.

I remember hanging out with girls who are like myself and they were telling me to just be passable, just blending in as much as possible with the crowd.

At first, it was a challenge but I eventually figured it out. As I got older, I started to mature. I started to see what works for me, and what doesn’t work for me. And now I’m set with how I live openly.

We know that you have a background in dance. How did you get into dance?

I’ve been dancing since I was five, or six. My first time seeing Alvin Ailey, I knew that dancing is something I wanted to do. Also, during that time, because I’m a 1992 baby,  There weren’t enough African-American dancers being exposed at that time and even though I didn’t really know what that meant at that time,  I just knew that I wanted to dance. My mom and my dad made it their point to go ahead and get me to do that.

How has your career in dance evolved over time?

I went to the North Carolina Dance Theater, now it’s called the Charlotte Ballet. I was there training in ballet, modern jazz, and contemporary jazz. I also went out to California and studied under Debbie Allen. I got into Hip-Hop, salsa, Flamenco, African dance and musical theater acting.

You attended Johnson C. Smith as an undergrad. What was your experience like there?

It was good. I would say it wasn’t as bad an experience as I thought. I think when I went there I was the only openly trans woman to be on the campus or just to even go to the school. When I went there, there were others in the LGBTQ community so people were just open to seeing that and accepting it.

I was never lashed out at or treated differently. I was accepted just like everybody else. I just felt like that was also a time when change was starting to happen, especially out here in North Carolina, because we are still in a biblical belt. People were more open-minded.

What did you get involved in at JCSU?

I was on what you would call a pep squad called the golden bullets. My lovely coach Janell Joyner was actually a lady cat back in the day for the Charlotte Bobcats. The funny thing is the first time she saw me she saw something special. She saw the dancer in me, not me as a trans. She just saw a person who loves to dance. She saw so much potential in me that she told me that whenever I was ready for the “big leagues” she would take me under her wing.

Did you ever feel any type of jealousy or animosity from your fellow dancers for being trans?

Not at all. If anything, my teammates were always there to help and would ask me for help too. They were like, “Hey, listen since you have all this training, can you show us a couple of stuff, help us reach that level.”

I just think if you’re mature, you can have a conversation with everybody.

I’m the kind of person that wants to see everybody win. I don’t want to be that person that’s gonna keep valuable information to myself. If I know a way to help you get to where you need to be, I will do that.

I was lucky enough to have girls on the team who were just willing to learn and be better.

How did you hear about the audition with the TopCats?

I was scrolling on the Carolina Panthers website and saw a TopCats tryout advertisement. I just registered my name. This was during the summer of 2021, way before the actual auditions. Months had passed and I honestly had forgotten about it until I got a reminder in my email that I signed up. I was kind of scared so I called my mom.

She was like, “What? You’re scared for what? You know how to dance so just go out there and do your thing. Then if you don’t make it, just try it again.”

I went out and tried out and made the team a few months later.

First, we had the prelims where we had to submit an audition video of us doing a choreographed routine.

I think it was like over 600 people who applied and only 180 made it to the semi-finals.

The semi-finals were in-person and we had to go through technique, learning three or four different dance routines that we have to memorize.

If you made the cut through the choreography, then you’re going to make it to the finals, where it was only 80 of us. So you can only imagine how tough the competition was. Everybody was gunning for each other in a playful way and trying to push each other to be the best.

What was your reaction to making the squad?

We waited for about three to four days. I was anxious just like everybody else. I remember I literally got the call from my coach while I was driving and I pulled into a church parking lot.

After she told me that I made the team, I just took a second, and I just thanked God for just allowing me to not able to dance but to be me while doing it.

How did your teammates respond to you being on the team?

My teammates didn’t even know I was trans at first but they love it. It’s obviously something new for them, but they have my support and I have theirs and they’re just with me through the entire process. They let me know that if I wanted to talk about anything that they were always here for me. We’re like our own little sorority and fraternity because we also have guys on the team as well. We are just like a big family and we protect one another and we just make sure that we have each other’s back.

How does it feel to be a trailblazer in the professional cheerleading business?

I’m happy that I’m able to do it because somebody has to do it. And I think it just takes a person who is confident in themselves and just knows their worth.

It really just stemmed from faith, honestly. That helps me throughout my entire day, throughout my entire life. I’m just happy to be in the position that I am now. I’ve had other trans girls and guys reach out to me and say, “Hey, listen, thank you for doing this. So now I feel comfortable to try out.” I’m just happy to be in the place that I’m in now to do it and experience it.

How do you expect to feel on your very first game day?

I’m probably going to cry because it’s been a dream and a goal of mine for a long time to be a Topcat. I’m excited, but I feel like I haven’t really had my moment yet. I think I’ll have it once I hear all the fans and everybody out on the field and just going through the actual experience.