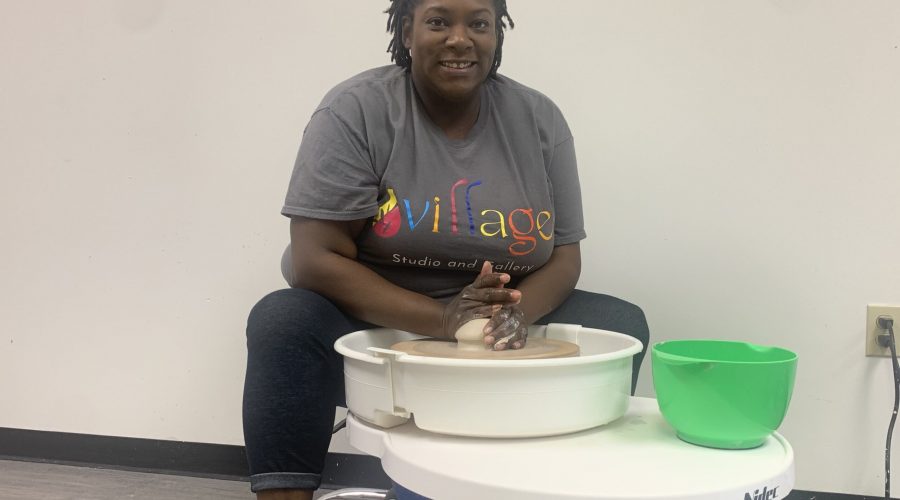 After the birth of his second child in 2019, Ella Stafford struggled with depression. In search of a creative way to cope, she began visiting a local pottery shop.

“It was my escape. I was living in my silence, so pottery was my getaway,”she told QCity Metro.

Today, Stafford is owner of Village Studio and Gallery in southwest Charlotte.

In addition to selling pottery she makes, the shop offers workshops and pottery-making sessions for beginners and those more accomplished.

The shop’s name, she said, comes from a decision she and her husband made to leave Atlanta in search of a “village” to raise their family. The Columbia, South Carolina, native said she wants her shop to be a safe space for others who need support.

“Starting my shop was me trying to create a village for others to escape,” she said. “If they couldn’t find a village in the area, they could find one here.”

She hosted her official grand opening on February 26.

The idea to start a business came gradually, Stafford recalled. It began after she molded an Afrocentric-themed tea set for her daughters. Stafford liked the results and started selling her work — a part-time gig, she imagined.

When the pandemic came, Stafford, who worked as a data analytics coder at the time, struggled to balance work and watching her kids during the quarantine period.

“I was done,” she said. “I finally said enough was enough.”

In November 2021, she quit her job to become a full-time entrepreneur.

While some questioned her decision, Stafford said her background in analytics and accounting made her confident in her ability to make good business decisions. So after initially selling her work and hosting pottery workshops from her garage, she invested her life’s savings to buy a brick-and-mortar location.

“Being a new startup business, I didn’t have the history to go after funding, so I had to use the forbidden funds to do this,” she said.

On Valentine’s Day, Stafford hosted her first event for couples. She called it “Build with Love.” The turnout, she said, was great, which led her to realize that men had become her biggest clientele.

“It’s mainly the guys booking events for them and their spouse or significant other,” she said.

Every Wednesday, Stafford hosts a guy’s night event as a way for men to express themselves creatively through clay. She plans to reserve Friday nights for weekly sip-and-mold events for women.

Stafford also uses her space to promote and sell the work of other artists, from paintings to clay cups and bowls.

“There are a lot of people that really rely on their art to make ends meet,” she said. “So it’s important for them to have space outside of social media to get their pieces in front of the right people.”

“Going into the pottery business wasn’t so much about selling my personal work but to show other people the joy and peace that pottery has brought me,” she said.