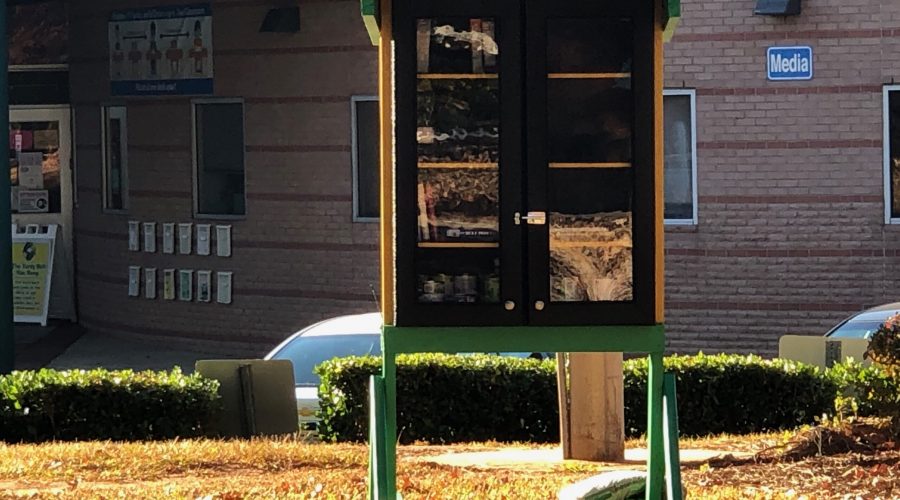 To stop the bleeding from the Covid-19 pandemic’s impact on literacy rates, some communities have rolled out “little libraries,” a trend seen around the country that provides free books to kids with no hassle.

The latest community to do this is Hidden Valley, led by Charles Robinson, vice president of the community’s neighborhood association and founder of nonprofit One Time, Inc.

Beginning on Saturday, Nov. 13, about ten little libraries popped up in and around the Hidden Valley neighborhood after more than a year of planning. Literature for readers at every level is available, as well as books for Spanish speakers.

Where some of these little libraries will be:

“This reading piece is very important for our children to be able to compete,” he said.

Charlotte-Mecklenburg Schools students saw a decline in reading scores across all races and socio-economic backgrounds at the end of the 2021 school year.

According to CMS data, 60 percent of third-graders in CMS were not proficient in their end-of-grade (EOG) reading test, and among the economically disadvantaged third-graders, 78 percent were not.

Studies have shown a child’s reading proficiency by third grade directly correlates to their future success academic performance in high school and beyond.

“A large way that students can become proficient is reading through the help of adults and reading independently,” Castellino said.

“In order to do that, you need access to books,” she said. “So if you don’t own books, don’t own enough books, and don’t own a variety of books that can interest you, it’s going to be really hard as a child to get all of the practice that you need.”

Standing in the gap

Last year, at the height of the pandemic, Robinson and other Hidden Valley community members noticed that children in their neighborhood, particularly those at the transient motels and hotels around Interstate 85 and Sugar Creek Road, did not have access to a library.

In talking with principals at the neighborhood elementary and middle schools, they also learned that most neighborhood students were reading below grade level.

For Robinson, the little libraries were a remedy.

He began reaching out to the Charlotte-Mecklenburg Library-Sugar Creek branch and University City Partners to gather books. Then he applied and won a Neighborhood Matching Grant from the City of Charlotte that he used for wood to build the libraries.

That’s when Promising Pages — a local nonprofit that collects books for children living in book deserts — stepped in to build the little libraries and pledged to assist with keeping them stocked.

“When you think about the reading level in this community, this little library piece is to help attack that,” Robinson said. “If we don’t put them (students) in a position to succeed in school, when they hit 18, what will they produce? What does a community produce when a child has failed?”

As a little league coach for over 20 years and a CMS reading buddy for ten, Robinson said he’d seen first hand the outcome of students who have access to books and reading versus those who don’t.

“It starts in the home, but the village has to stand behind these children because if not, we’re going to be doing a lot of balloon releases, going to court a lot, and watching a lot of violence take over our city,” he said. “And that’s exactly what we’re seeing right now.”

Robinson would like to believe that he was born into outreach work and assisting people in any way that he can.

A lifelong resident of Hidden Valley, Robinson has worn many hats around Charlotte, and he’s done a little bit of everything too.

From coaching kids and feeding the hungry to leading the protest against the City Council about the new redistricting maps that will move Hidden Valley from District 4 to District 1, Robinson is there. The Council voted to approve the move on Monday.

Wins or losses, he takes them in stride. Now he’s focused on the launch of the little libraries and feeding the hungry this Thanksgiving.

Brewton died in 2008; Stevenson in August.

“Both ladies fed, clothed, and loved on people,” Robinson said. “Pastor Stevenson pulled me and said, Charles, this is what you’re supposed to be doing. So I listened, not really having a lot of experience, but just having the heart to do the work.”

As Thanksgiving rolls around, Robinson has partnered with more than a dozen community organizations to feed 5,000 people at the Ophelia Garmon Brown Center on Nov. 23.

Families will have a hot sit-down meal in the morning, and for those with vouchers, they’ll get a Thanksgiving meal-kit to prepare at home that includes a whole turkey and canned goods. Vouchers will be distributed through various nonprofits and some schools.

Of the 5,000 meals, Robinson said they would send 500 meals to Pastor Stevenson’s church in honor of keeping her legacy with feeding the hungry.

“When Pastor Stevenson passed, she told her daughter to keep that ministry going,” Robinson said. “So it’s important to me that I give back to her because she always sowed into me. So we’re going to send 500 meals to her church so that they can feed people on Thanksgiving.”

With partners like A Brighter Day Ministries and Feed Charlotte, Robinson and company will also send about 2,500 meals to local motels, hotels, and senior living centers.

Putting the Thanksgiving effort together has had its challenges — like the cost of food and acquiring enough turkeys. With two weeks left to go, Robinson said, via his Facebook account, “the Turkey Challenge amongst my friends continues…I need 500 of my friends to help.”

It’s been difficult to collect thousands of turkeys given the circumstances, Robinson said, but he believes in God for it to come together.

He added that meeting the food donation goal is vital given some Charlotte residents’ many hardships, including pending evictions, underemployment, and food insecurity.

“There are still some challenges that folks are having, and it’s not over. Charlotte still has food deserts. We have hotels where we have eight kids in one room. How often do they get a sound meal?”

“We’re not going to fix everything in this one day, but we’re going to show a lot of love and give to those that we know have a need.”