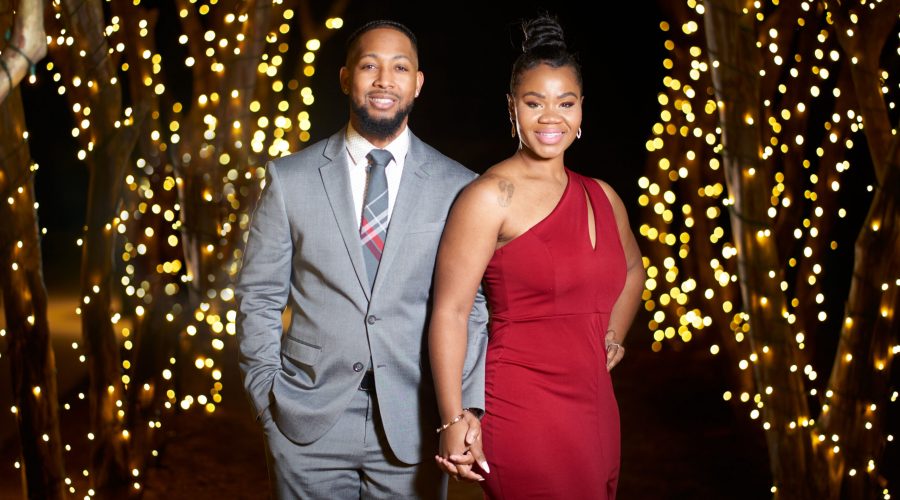 David and Jasmin first met while attending Charlotte- area colleges. The seeds planted during those early years are about to be harvested when they exchange vows in May.

(Jasmin) We met on the campus of UNC Charlotte. He attended Johnson C. Smith University and is a part of Kappa Alpha Phi Fraternity Incorporated. I’m a member of Beta Phi Beta Sorority Incorporated at UNC Charlotte. My chapter was having a program, and we met there. He came up to me and asked for my number. I told him that he could give me his number. I called or texted him that night, and it just grew from there. We never really went on a date in college. I was juggling classes, so most of the time we just hung out, either at his apartment or my dorm. After graduating, David moved to Atlanta and we focused our attention on starting our careers.

(Jasmin) We didn’t have our first real date until 2018, when we reconnected. He was living in Birmingham, Alabama, but came back to Charlotte for Johnson C. Smith’s homecoming. He sent me a message on Snapchat, and we started talking again. We ended up going to Luigi’s Pizza on South Tryon Street. We had a great time. This time we were ready to get serious about our connection. That included maintaining a long-distance relationship until he moved back to Charlotte in August of 2019.

(Jasmin) I knew I had met the one when I was in trichology school. I was at my aunt’s house, and he came over. He was talking to my aunt and my best friend. Based on his answers to their questions and how genuine he was, I knew that he was the one.

(Jasmin) I knew that David would one day propose; I just didn’t know when. It happened on his birthday in January 2021. We had planned to go out to dinner to celebrate. Before he picked me up, he had made a video saying that, even though it was his birthday, he intended to surprise me.  We went to Steak 48 and had a wonderful evening. After dinner, we went back to the apartment. When we opened the door, I was surprised to see that he had arranged for our friends and family to meet us there. He walked me over to the Christmas tree, got down on one knee and asked me to marry him.

I am definitely excited to begin this journey, and even more excited that David and I were able to reconnect. He was always persistent in pursuing me and didn’t give up. If he had not, I probably would have missed out.

(Jasmin) When people say that wedding planning is stressful, they don’t give it the justice that is due. It has been interesting, to say the least, and has caused some disagreements. Aside from trying to get the logistics taken care of, it hasn’t been that bad, but I’m glad to be at the final phase of it. We have been working with a wedding planner throughout this whole process. She is absolutely amazing The biggest challenge has been trying not to spend everything in the world to get everything that I want. It helps to realize that this is one day, and we will still have to live afterward.

(Jasmin) I’m looking forward to my dad walking me down the aisle and David seeing me for the first time. I want to see his reaction. A lot of people say once you get married things will change. I would love to know how we’re going to evolve going forward.

(Jasmin) I would say don’t sweat the small stuff. It doesn’t matter what other people think, it’s about you and your fiancé. That’s all that matters.

If you start listening to what your parents, friends, etc. want, it’s only going to drive you crazy. Do what the two of you want.

Are you recently engaged, married, celebrating an anniversary or renewing your vows and want to share your story? Click here.