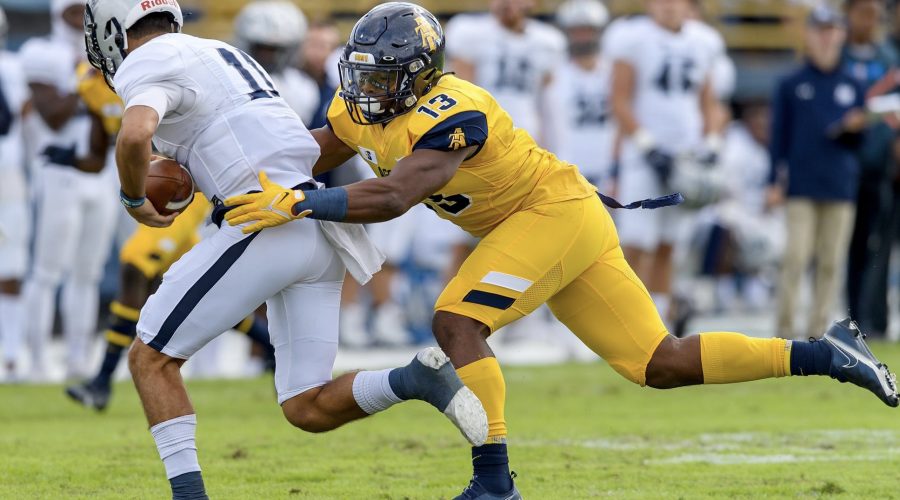 Growing up in Charlotte as a Carolina Panthers fan, Jacob Roberts has long dreamed of playing football on the storied turf at Bank of American Stadium.

Linebackers Luke Keuchly, Thomas Davis and Shaq Thompson were among his all-time favorites and had each played there.

Now, as a linebacker for North Carolina A&T State University, Roberts’ dream is about to come true.

On Sept. 3, inside the stadium he admired as a boy, he and his teammates will line up against their in-state rivals from North Carolina Central University in the Duke Mayo Classic — one of the biggest HBCU football games ever played in Charlotte.

“It’s going to be amazing,” Roberts told QCity Metro. “I talk about it each and every day. I dream about it every night, so I just can’t wait for that.”

During his playing days at Mallard Creek High School, Roberts was a standout, staring every game his junior season, which ended with a state championship in 2017.

The following year, he led the Mavericks in tackles and interceptions, earning first-team all-conference honors and an invitation to the Shrine Bowl.

He chose A&T, he said, because of the connection he had formed with the coaches there during his recruitment. Then, after visiting the school during a homecoming game, he committed.

“It was the first school that gave me a chance, and I really didn’t want to go too far away from home,” he recalled.

Roberts saw the field as a true freshman, primarily on special teams and third down plays. It wasn’t until October that he got his first start on defense, against Florida A&M University. The Aggie would lose that game 34-31, but Roberts said he felt that he earned the trust of his coaching staff.

“They believed in the player that I am, and I went out on the field and showed them what I could do,” he said.

Roberts would have a breakout performance that freshman year during a Homecoming game against Howard University. He finished with 15 tackles — six tackles for loss — and three sacks. The Aggies won 64-6, and Roberts earned MEAC Rookie of the Week and Defensive Player of the Week honors.

Roberts helped lead the Aggies to a 9-3 record, and the team shared the MEAC champions with South Carolina State University.

The Aggies defeated the Bulldogs earlier in the season, so they earned a spot in the Celebration Bowl at Mercedes-Benz Stadium in Atlanta.

During the game, Robert had six tackles and an interception, helping his team to a 64-44 victory against Alcorn State University. His performance earned him Celebration Bowl Defensive MVP.

“It was a great game, great experience down there in Atlanta,” he said. “My family came and supported and I’m just glad we came out with the win.”

Despite having only three starts during his freshman season, Roberts finished the year tied for the team lead in tackles for loss (12) and was third on the team in tackles (62).

Though Covid canceled the team’s 2020 season, Roberts believes it benefited the team. During the offseason, the team was housed in small groups of 10 to 15 players. Roberts said that experience drew them closer.

“We just worked out together. We play games… just to make sure we were on the same page and we had that camaraderie,” he said.

In 2021, NC A&T started its first season in the Big South Conference, and Roberts was named a starter.

The sophomore linebacker had several breakout games. Against North Alabama (Oct. 9) and Kennesaw State (Oct. 16), he recorded a total of 28 tackles and one tackle for loss.

The Aggie finished the season with a 5-6 record, but Roberts had made his name known across the conference. He earned second-team All-Big South conference honors, ranking top-10 in multiple defensive categories.

He led the team with 84 tackles (38 unassisted), 12 tackles for loss and five sacks. He led the nation with four blocked field goal attempts.

Roberts said the Aggies plan to have a better season this year, and it starts with focusing on earning a win against the Eagles in Charlotte, which opens the season.

Roberts was selected to the 2022 HBCU College football Pre-season All-America team by BOXTOROW.

He said he still feels overlooked and wants to improve on the success he had last season.

Roberts acknowledged that the atmosphere is always intense whenever the Aggie and Eagle collide, but he said he’s not worried.

“We’ve played in plenty of big games, so we’re gonna treat it as another game,” he said.

Roberts said more than 20 family members will come to see him play Labor Day weekend. And while he looks forward to returning to his hometown and enjoying the city with his teammates, he said he doesn’t want to lose focus on the bigger goal.

“We know that when Saturday comes, it’s time to lock in and get a W,” he said.

Editor’s note: QCity Metro is committed to providing our readers with first-rate coverage of this year’s Aggie-Eagle Classic. To support our work, sign up for our limited-edition Aggie-Eagle newsletter and/or click here to make a donation.