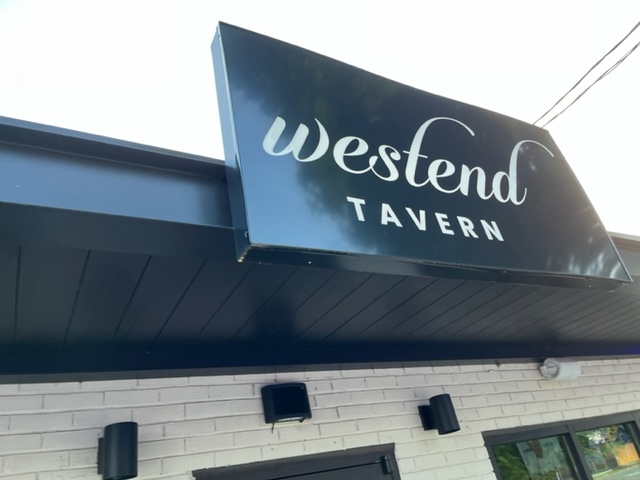 On Wednesday evening, I walked into West End Tavern for a meet-n-greet with members of Charlotte’s Fifth Third banking family. You could hear the good vibes from the street and as I approached, I walked smack dab into a line dance already in progress. (Electric Slide)

Shortly after, I bypassed the food spread and made my way to the bar to cool my tongue on a hot and humid Queen City night. The bartender was very cool and poured my favorite summer drink, pineapple and Crown Royal.

While rocking to the tunes, I was soon approached by a guy I’d never met before. His name was Robbie Varghese; he and I talked about our Charlotte roots and how the city’s changing, in particular on the West End. While he is a retail banker by trade, Robbie is also passionate about highlighting all of the people and places that make Charlotte welcoming to its natives and transplants.

After me and Robbie dapped, I had finally cooled off inside and felt bold enough to travel to the outdoor area. Once outside, I had a pleasant conversation with a group of three blowing hookah and vibing out in their own section.

When I re-entered, I had to get a snapshot of the quite dope “West End is the Best End” backdrop.

Once I cooled off, I stopped to appreciate the moment. There were children playing, adults of all ages socializing, some eating, and others singing to the music. It felt like a place where all were welcomed and celebrated for their individuality.

While taking it all in and with a half-full pinksy (pineapple whiskey), I spoke with Dante Wilkerson, Financial Center Manager and Assistant Vice President at Fifth Third Bank. We had a nice talk as Biggie’s One More Chance played in the background.

He’s been President for 8 years now, I asked him about the visibility of Fifith Third Bank at events like this. Wilkerson stated, “the intensity has increased as far as the amount of face time with the community, it’s more intentional. I mean look at the growth in Charlotte, we’re opening up more locations here too. We want to be apart of the community we work in.”

He continued, “Where other banks fight for market share, we’re fighting for relationships. If all these bankers can talk to you and have a real heart to heart conversation and help out the community, it’s something to be proud of.”

As karaoke crescendoed the night away, I asked him to give one piece of advice Black folks could particularly benefit from in relationship to banking, he advised to “take inventory.”

Wilkerson explained, “Honestly have a conversation about the pandemic… We’re kind of just rolling through the pandemic as if it’s over. Inflation is high. Gas prices are through the roof. A lot of people came to financial institutions when COVID first hit. We need that same intensity now that gas is $5 a galloon. Let us help you set your financial goals and achieve them.”

Regarding Wednesday’s event, Wilkerson simply said, “This isn’t the first time, it won’t be the last time either.”