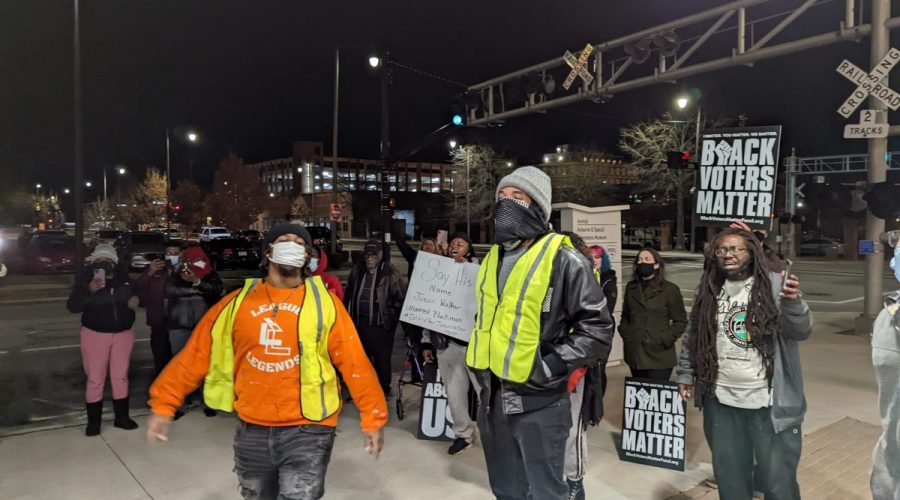 FAYETTEVILLE — The Fayetteville City Council voted unanimously to request U.S. Department of Justice involvement in the investigation of an off-duty Cumberland County sheriff’s deputy who shot and killed Jason Walker, an unarmed Black man, outside his home in Fayetteville on Saturday afternoon.

The shooting came after a disputed incident during which Walker, on foot, was either hit by or jumped onto the deputy’s truck.

In a video taken by a bystander after the incident, the law enforcement officer, Jeffrey Hash, who is white, claimed he acted in defense of his family, who were in the vehicle. Eyewitnesses to the incident dispute his claims and say there was no reason for Hash to shoot Walker.

In the video, a woman in street clothing, later identified as Elizabeth Ricks, gives medical assistance to Walker, who is lying on the ground bleeding next to a red Ford F150. A white man, presumed to be Deputy Hash, is seen standing nearby talking on a cellphone.

When Fayetteville police officers arrived on the scene, Hash recounted his version of events: “He ran across the street, so I stopped. He jumped on my car and started screaming.” In the video, Hash is heard claiming Walker pulled the windshield wipers off his vehicle and began beating on the glass.

An eyewitness told police that Walker was not struck by the vehicle, according to Fayetteville Police Chief Gina Hawkins.

No video of the incident or shooting is known to exist.

In a press conference Sunday night, Hawkins and Cumberland County District Attorney Billy West said they were turning the investigation over to state authorities to avoid the appearance of a conflict of interest.

Hash was taken in for questioning but was not arrested, Hawkins said.

At Monday evening’s City Council meeting, several members of the public expressed frustration at the response of Fayetteville police officers at the scene and called for greater accountability.

“The officers that arrived at the scene automatically determined who the victim was and created an environment of protection for off-duty Sheriff (deputy) Jeffrey Hash, who Chief Hawkins claimed was treated like an average citizen,” said Angela Malloy, one of the session’s public speakers, before calling for accountability of those officers and for transparency from the Police Department.

Outside the meeting, about 30 protesters shouted, attempting to disrupt the council proceedings inside. Some leading the protest called into the meeting to make public comments, criticizing the council’s response to the shooting.

Some protesters, demanding that police charge and arrest Hash, attempted to speak with council members and Chief Hawkins as they walked out of the meeting, but the officials continued to their vehicles, making no comment.

During the meeting, council members passed the resolution calling for a letter to the U.S. attorney for the Eastern District, Michael Easley. However, Chief Hawkins said the FBI is already assessing the case.

“We are aware of the shooting death investigation in Fayetteville and are in regular contact with local and state authorities,” an FBI North Carolina spokesperson said.

“If, in the course of the North Carolina SBI investigation, information comes to light of a potential federal violation, the FBI is prepared to investigate.”

The State Conference of District Attorneys will select another district attorney’s office to ultimately decide whether to press charges against Hash, based on the SBI’s findings.

The Cumberland County Sheriff’s Office placed Hash on administrative leave pending an internal investigation, according to a department press release on Monday afternoon.

The release said Hash is a lieutenant in the civil section of the Sheriff’s Office, where he has worked since 2005.