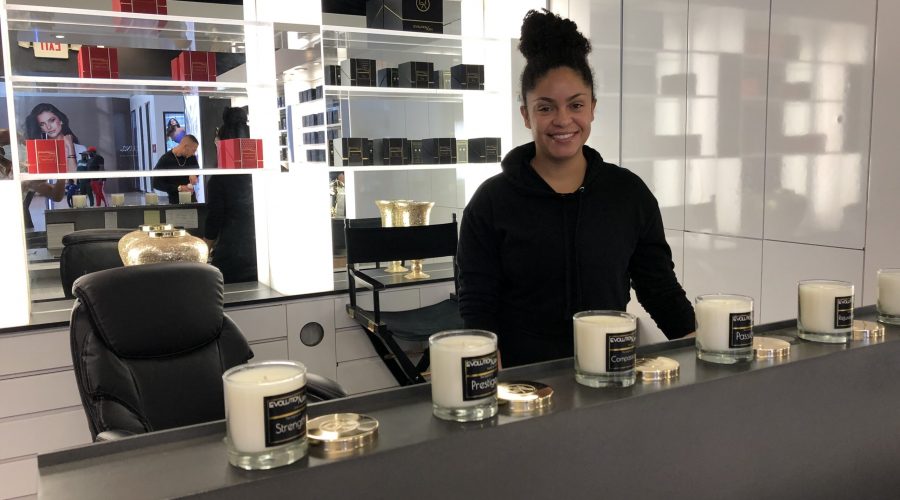 Company founder Adrian Hill said the store opened earlier this month and will host a grand opening celebration on Oct. 28 from 6 p.m. to 8:30 p.m.

Hill said the company was intentional in choosing the upscale mall in south Charlotte.

“SouthPark has a needed presence for Black-owned businesses that operate at a very high quality,” he said. “And then it shows our representation is that.

“A lot of times, Black-owned companies create phenomenal products for other brands, but yet they never have a voice of their own,” he added. “And I feel like Evolution Aura gives us that voice because we’re there, present.”

An 8-ounce candle at Evolution starts at $55. The company’s most expensive product, an 80-ounce candle, sells for $250.

Alexis Gonzales, the company’s chief operating officer, said that for many consumers, candles are more than a luxury item.

“There are people that are self-proclaimed candle lovers,” she said. “They relax to them, they light them before they do work, they make it a shopping stop on their trips to the mall.”

Hill, who got his start in the fragrance business, said scented candles can change a room’s atmosphere.

“Fragrance taps into connections,” he said. “When you smell something, it reminds you of something, so there’s a reason why you’re drawn to a particular fragrance.

The National Candle Association points to research that estimated the size of the U.S. candle industry at $3.1 billion in 2013.

Hill said he started the company based on the concept that “we all have an aura about ourselves.”

In a press release announcing the store’s grand opening, the company said it would donate 20% of its profits through the end of the year to Beds for Kids, a Charlotte nonprofit that provides beds and essential furniture to children and their families in need.

The company also is LGBT-certified, according to the press release.

“I wanted to create a brand that had a human-centered connection that also empowered communities around it,” Hill said.

Looking ahead, Gonzales said the SouthPark store eventually will add a skin-care line. She also hinted at the possibility of adding new locations.

“It’s going to be whatever God has for us, but we definitely have our site set onward,” she said. “But we want to make sure we do a really great job with this location first before expanding to somewhere new.”