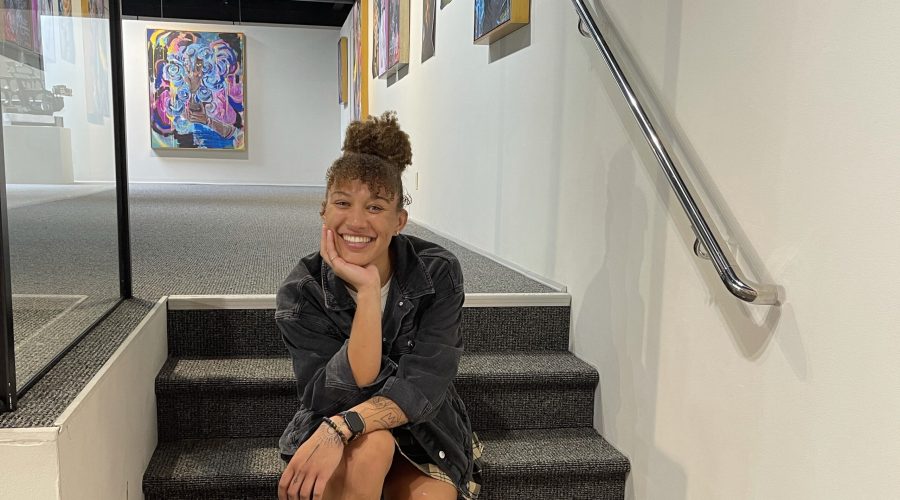 Makayla Binter has long had a love for creating art, but after graduating from Davidson College in 2020 with a degree in biology, her focus was on sports medicine.

That focus began to change shortly after George Floyd died under the knee of a Minneapolis police officer.

As her artwork gained more exposure, she decided to abandon a career in sports medicine to make a name for herself in the local art scene.

“I was just surprised with how fast things were moving for me, and I was, and still am, working to be present in every moment and opportunity,” the Rochester, New York, native told QCity Metro. “I honestly am just doing what seems and feels right and hoping for the best.”

On Saturday, Makayla’s artwork will be featured in “Who Are Your People?,” her first solo art show, designed to give visitors an in-depth analysis of what intersecting identities look like through the use of abstract artwork.

Located at Elder Gallery of Contemporary Art, the exhibition will feature 14 pieces created by Binter consisting of various paintings and photographic collages that use images of herself and her subjects combined into one.

Binter’s love for art started when she was seven years old and spending time with her adopted grandmother who was a painter.

She recalled their countless trips to Michaels, an arts and crafts store, where they spent hours choosing art supplies.

“Anytime that she was drawing or painting, she would encourage me to paint and draw with her,” Binter recalled.

After graduating from Greece Arcadia High School in Rochester in 2016, Binter and her mother moved to Charlotte after she was accepted into Davidson College.

While at Davidson, Binter facilitated the Mural Panel Project, an interactive mural that sought to engage conversations around social inequality at on campus. The mural has been featured throughout Charlotte in places such as the Levine Museum of the New South.

“That project really got me extremely interested in asking a lot of questions about murals in Charlotte,” she said.

Binter said that after graduation, her initial plan was to work in sports medicine alongside her mentor as a physical therapist for the National Collegiate Athletic Association.

Her interest in murals would alter those plans.

While taking pictures of the Black Lives Matter mural in uptown Charlotte, Binter met South Carolina-based artist Frankie Zombie. Impressed by her work, he recruited her to help paint a similar mural in Spartanburg.

“I did not know a single thing about scaling on the ground, and my only experience was one street mural beforehand,” she said. “More than anything, I was honored about the opportunity and ecstatic to be trusted with such a responsibility.”

Since then, Binter has worked on at least eight murals locally, including a Black Lives Matter mural in Gastonia and the “Beatties Ford Strong” mural on Beatties Ford Road. (The latter was painted last year after a mass shooting near that site left four people dead and several injured.) She so has created at least 30 paintings and photographic collages since the start of the pandemic.

Binter has been commissioned by the city of Charlotte to create murals in City West Commons on West Boulevard and Andrill Terrace.

She was also one of several artists commissioned to create works at Camp North End in late 2020 ahead of a campaign stop by then-presidential candidate Joe Biden and his running mate, Kamala Harris.

In January, Binter joined a roster of 35 local and national artists whose artwork is routinely featured and sold at the gallery, which was established in 2001 by Larry Elder and sold to Pfeiffer in 2017. One of the changes Pfeiffer made was to rebrand the gallery and its roster by adding “contemporary artists who address contemporary issues” through their artwork.

Binter, Pfeiffer said, fits that description, and she has admired Bitner’s work since the artist’s days at Davidson.

“The work she does is extraordinary. It’s thoughtful, yet introspective,” Pfeiffer said.

Elder Gallery allows its artists to host both solo and group shows. Pfeiffer said she believes that viewers will enjoy Binter’s first solo show and will find a connection with the artist.

While each painting has a unique meaning to her, Binter is excited to see visitors create their own interpretation of her work.

“…It’s not about me anymore.” she said. “These pieces are now for other people to see and experience.”

Binter said one of her goals is to represent the Black community in a positive light through her artwork.

“I want to showcase the multitude levels of humanity that reside in the Black experience that are not featured as much in mainstream media,” she said. “So much trauma and violence is attached to Black and Brown bodies that I prefer to showcase the beauty and softness that is often displaced by fear.”

The showtime for “Who Are Your People?” is from 12 p.m. to 5 p.m. Admission is free, and Binter’s exhibit will run until December 4. Visitors can RSVP on Eventbrite.

In keeping with pandemic protocols, visitors are asked to practice social distancing and wear face coverings, as required under Charlotte’s masking mandate.