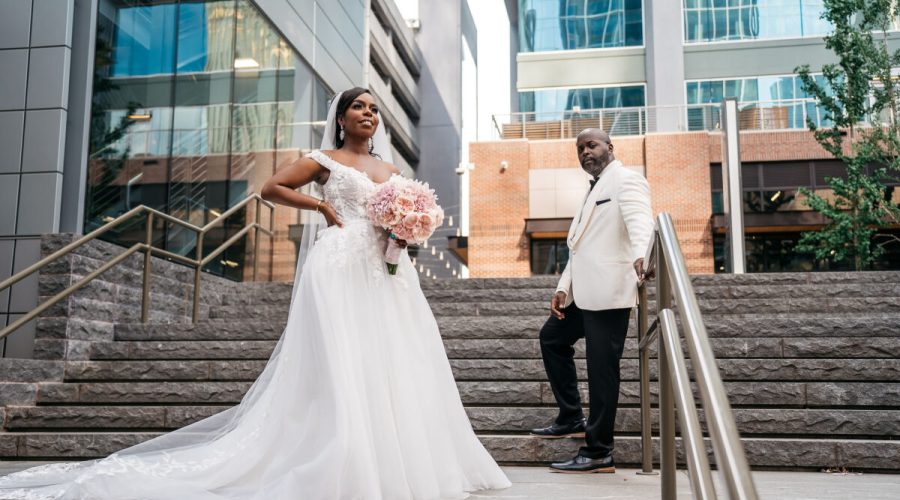 If you want to achieve any goal, you must first be able to visualize what you want and commit to actively pursuing it. When Jelani met Dawn, he knew he wanted a long-term relationship and was willing to combine action with his desire.

(Jalani) We met online in October 2020 on Match.com. I saw Dawn’s picture and thought she was breathtakingly beautiful. But the most attractive part of her online profile was her personal bio. I thought she was highly intelligent, articulate, insightful and transparent. All those intangible attributes were things that attracted me initially.

I sent her a message asking how her search was going and if I could have her telephone number. She gave it to me, and we spoke for the first time that evening.

(Dawn) I had been on Match for a week or two and was just getting acclimated to the online thing. You never know who you are going to meet. Jelani was like a breath of fresh air.

One of the things that stood out to me about his profile was his transparency. It was nice to see someone talk about their religious beliefs. Some gentlemen on the site did not write much at all. His pictures also registered with me. They reflected honesty and kindness. He asked if we could schedule a time to speak, which was unique. He called at that time on the dot, and our conversation just flowed. He was a gentleman from the moment of introduction. We had so much in common. We even shared the same birthday. After two phone conversations, we had our first date.

(Jelani) Our first date was at 131 Main in Charlotte. I wanted to share a small memento to commemorate the date, so got her chocolates. She appreciated the gesture, but I learned that she is not a big chocolate person. It still worked out well because she shared them with her mom, who enjoyed them, and I was able to make some inroads with her mom. On our second date, I met Dawn’s mom and began understanding her family’s inner workings.

At that time and age, I wasn’t trying to mess around or play games. I wanted to be direct and make my intentions clear. I wanted to let Dawn know my objective was dating with a purpose, not just dating or looking for benefits or a hookup. I was looking for a long-term relationship. Not everyone on Match.com wants a long-term relationship. Before our first date and during the first couple of conversations I let her know I wanted to spend time with her intentionally. She took me at my word, and on date number two, there’s her mom. Dawn made me into a man of action, and I appreciate that.

(Dawn) I was extremely impressed with Jelani. He was the consummate gentleman. He met me at my car door, had a gift for me, opened the doors, and pulled out my chair. We talked until the restaurant closed, then sat in his car and talked some more. Then he walked me to my car and stood outside his car to make sure I left the parking lot safely. I don’t think any man has ever done that before. In every sense of the word, he was gentle, kind, and intentional.

(Jelani) I appreciated the fact that she displayed her trust tangibly by agreeing to sit in my vehicle and talk. She did not know me or my track record. She did not know my level of integrity. I wanted to make sure that I honored her willingness to be vulnerable with me. I did not take that lightly or believe it to be a trite maneuver. She was showing herself to be available to me. It was a subtle gesture but very effective in getting me to further ingratiate myself into her presence and meet her at her level of transparency.

Dawn’s mother was in town a few days later. Dawn made an impromptu call and asked if I would like to meet them for lunch. We went to the same restaurant. I could see clearly where Dawn gets her “salt of the earth” personality. Two weeks after our first date, I sheepishly and nervously asked her to be my girlfriend. She was so inviting and encouraging and said, “Yes.”

(Dawn) I was a little surprised. I didn’t expect it to happen so quickly, but I wanted to reassure him that I was also ready for a relationship. There were a lot of changes going on in my life then, and Jelani became my anchor. He has a calming and reassuring energy that was exactly what I needed.

(Jelani) I knew that Dawn was the one for me after she met my children for the first time. Part of the package that I was bringing with me was my three children. They are not little, two are in middle school, and one is in the fourth grade.  Dawn invited them into her life just as she had opened up and availed herself to me.

She’s a memory maker, an imagination engineer, who takes things that are impractical and makes them practical. What better way for her and the children to rid themselves of nervousness than to have an event that included something sweet?  It was a snapshot of her willingness to accept all I brought. I said, “Yes, I need to go ahead and start looking at rings and figure out how I can move forward to the next level.”

(Dawn) I was scared initially. I was a woman in my mid-thirties who’d had a journey to find love. I have been in situations where I had to figure out who I was seeing or felt misled by promises that were unfulfilled. Most of us have some scars on our hearts. Jelani was just the opposite, a man who was saying what he meant and meaning what he said. He wasn’t afraid of commitment. I told my mom that I thought I had met my husband.

It was Easter 2021, the night my grandfather met Jelani. We were sitting around the table talking when the words, “Love lives here” came to me. “This is the perfect puzzle piece. He’s the thing that I’ve been missing.”

I was a woman with no children who now had an unexpected fullness. When you live a solo life, you always focus on yourself. When you have little ones, there’s just a wholeness and a love that I hadn’t experienced, and it’s been such a beautiful thing.

He set up counseling and sent me the calendar invite. We started to ask deep questions about marriage, religious beliefs, and how we wanted to do things. We had a counselor to guide us through that process. We really wanted to get to know each other on a deeper level, and it was nice to have someone to facilitate that.

(Jelani) We got engaged in May 2021.  The actual proposal was quiet and unassuming. We were at Dawn’s townhouse, and the children were in another room. We were talking when I got down on my knee and asked her to marry me. It might not have checked all the boxes of a fairytale-style proposal, but it was intimate and quaint. It was between her and me.

The girls came out of the room, saw me down on one knee, and ran down the hall screaming, “Daddy’s proposing.” That was pure excitement from children who had already begun to develop their relationships with Dawn right from the beginning. She invited them to be close with her and develop their own relationships, and it carries on even to this day.

(Dawn) We had a full year to plan the wedding. After meeting with a wedding planner, Jelani gave me carte blanche to create the wedding of my dreams. With the help of Nicole Galloway, our planner, that is exactly what I did.

Wedding planning while working full time was definitely challenging. From finding the venue to arranging the seating chart, there was always a list of details demanding my attention. I had no idea how long it would take to find the right bridesmaid dresses. There were a lot of late nights trying to make sure that everything was done. I thank God for my mom’s support; she was our right-hand man. I found some really cool acrylic invitations that were boxed, so each person got a keepsake with their invitation.

(Dawn) The wedding was absolutely magical. It was very feminine and utilized my favorite color, pink. There was even a pink dance floor. It was a very small wedding with about 65 guests. I walked down the aisle to a song that I had fallen in love with several years ago, performed by the original artist.

We lit unity candles, and during the reception, my bridesmaids and I performed a surprise Beyonce dance while the DJ played a mix of three songs. We put that routine together in two days. It was a lot of fun. I had three wardrobe changes. Jelani’s processional song was ‘Don’t Touch Me now’ by Busta Rhymes. It was a unique accumulation of both our personalities.

My most memorable moment from the wedding was when we said our vows. We wrote our own and Jelani spoke straight from the heart. It was a really beautiful moment.

(Jelani) The most memorable moment for me was that Beyonce routine. I had no idea that Dawn had worked with her bridesmaids to do that. Dawn, in many ways, is an introvert, so for her to do that in front of all those people was very impressive. It was like her unveiling as a married woman, a butterfly coming out of its chrysalis to reveal a beautiful monarch.

(Jelani) We took a cruise to Jamaica with stops in Ocho Rios and Georgetown, the capital of Grand Cayman. This was my first time on a cruise and a really good experience. The shows, comedy club, and food were nice. We had several extra events included in our package like seating at the chef’s table.

(Dawn) His parents gifted the cruise to us, and we had a ball. Neither of us wanted to spend much time in the water, so we skipped swimming with the dolphins and such. I have to say; we met the most amazing people on the bus tours.  We still keep in touch with some of them. We were doing something every night. It was really beautiful.

(Dawn) First, get your budget in order, then select a good wedding planner that you can communicate with. Your wedding planner can alleviate stress or create it. Our planner worked with excellent vendors and helped me to understand the entire process. The major vendors are selected during the early days of the process. During the last three months before the wedding, you select the things that personalize the wedding and make it what you want it to be. It is easy to add substantial costs during this phase.

I would say to women, don’t automatically overlook men with children. I would not change a thing about my experience. I would also say that when a man wants to be in a relationship with you, his action will follow. He will be intentional.

(Jelani) Communication is the key to a happy marriage. It is a vehicle to present thoughts, ideas, and emotions. It is important for you to understand how you communicate and how your partner communicates. Men are wired to be solution-driven and problem solvers, while women are more geared toward presenting opportunities to gain intimacy through listening. As men, we need to understand that not every case needs fixing. Sometimes allowing there to be an uninterrupted vent process can be a soothing balm.