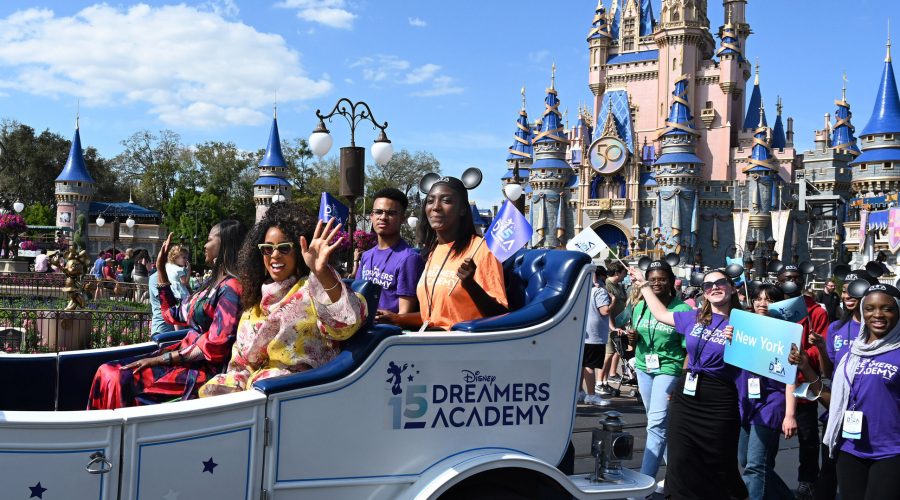 ORLANDO, Fla. — Each spring, The Walt Disney Co. brings together 100 teens from around the nation, all with one thing in common: They dare to dream big.

Though thousands apply, only a few are chosen to attend the Disney Dreamers Academy at Disney World.

This year, two Charlotte-area teens –Bryce Allen and Journi Kirby — were invited by Disney to this tourism mecca.

So what does it take to be a Disney Dreamer?

“It’s super simple,” said Tracey Powell, who holds the title of Disney Dreamers executive champion. “It’s all about being able to articulate their dream. They have strong character…empathy, they’re being authentic, and they know who they are.”

Allen, a senior at Hickory Grove Christian School in Charlotte, said he could hardly believe his selection.

The Disney Dreamers Academy, he said, “is something I’ve been looking forward to ever since I was young.” An aunt first told him about the program, now in its 15th year.

Allen has volunteered at his school’s food pantry throughout high school, and he is a senior ambassador of Charlotte’s Young Black Leadership Alliance, where he regularly participates in community-based projects.

Allen is passionate about graphic design, an interest he came to the Dreamers Academy looking to nurture. He attended design workshops, met with career professionals and worked alongside other dreamers with similar interests.

“I learned about the legal stuff, like buying fonts,” he said. “We worked together as a team and made a Disney logo for their graphic design program. It showed me what it’d be like to work in a corporate environment.”

“I really want to work for ESPN (a Disney affiliate) one day,” he said.

Kirby, a junior at Central Cabarrus High School in Concord, said she learned of the Dreamers Academy through an older sister who attended the program in 2011. Since then, Kirby said, her mom has wanted each of her kids to apply.

Kirby chose to spend her time at Disney focusing on science careers.

“I love science, anything to do with it; it’s my thing,” she said. “Hopefully when I get older I can go into a career that has to do with biology or astronomy. I love space, too.”

After attending a session that focused on animal services and the environment, Kirby said: “Bioengineering is a thing I could really look at, because I actually had fun cutting up a flower.”

Kirby credits the program with getting her out of her comfort zone.

“I’m usually a bit nervous going up to new people, but here you can just be next to someone and you’re brought in the conversation…and now you’re friends,” she said.

As for college, Kirby said she hasn’t decided where she wants to attend.

“I definitely want to make a good name for myself in the community for being a Black woman that’s really high up and really smart and good at what she does,” she said.

Tamerra Holmes, founder and CEO of Aerostar Avion Institute, a Chicago nonprofit that exposes young people to careers in aviation and aeronautics, was one of several professionals who came to Disney as motivators.

“I know that a lot of young people don’t have the tools they need to pursue their dreams,” she told QCity Metro. “They’re always told to dream bigger, but what does that look like, practically?”

Before the program officially ended, the students attended a graduation ceremony that was marked by emotional performances and inspirational speeches. Parents who accompanied their teens were given class rings to present to their students.

“Every single one of the Disney dreamers will be paired with someone in their career field of choice, where they can shadow them and understand more about that career,” said Powell.

In some cases, the connections last throughout the students’ years in college — and even longer. Princeton Parker, who attended the Dreamers Academy in 2011, now works at a Disney theme park in Anaheim, California. He was invited back this year to lead sessions for the latest class of dreamers.

“To watch them transform over the weekend, that’s the most exciting part about it,” Powell said.

As for future dreamers, Powell offered this advice: “I would tell them just to take the leap. It’s all about being able to follow those dreams.”