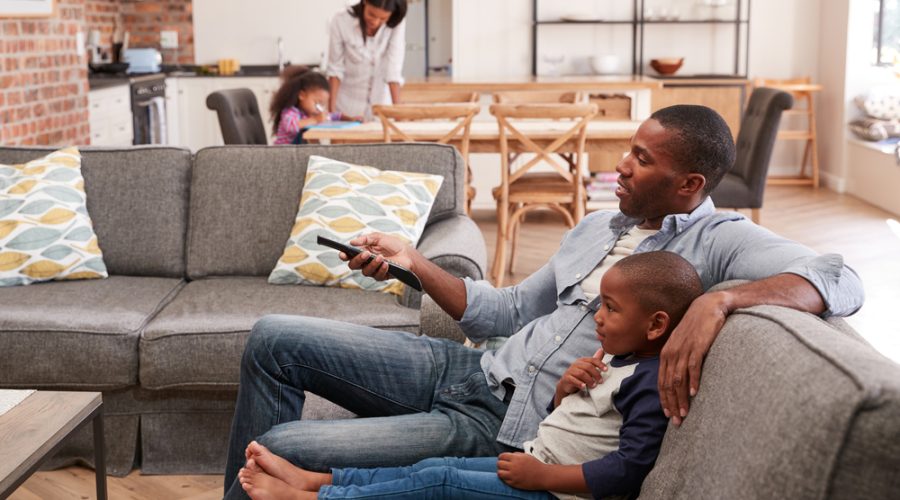 Parents are searching for reliable childcare and nannies have become a desirable option.

While many nannying services don’t offer specific demographics, according to local child care agencies, some Black families are moving toward in-home care over the option of childcare centers.

When Daivonna Graves was returning to work from the pandemic, she was concerned about who would take care of her one-year-old daughter.

She recently hired a nanny, joining a growing trend of Black families who are doing the same.

A need for one-on-one care

Kelly Posey and her wife decided to hire a nanny for the first time in 2018. They wanted to have someone work closely with their children.

Her twins, Kolton and Kallin, both have special needs. Kolton is developmentally delayed with a rare medical condition and Kallin has cerebral palsy.

Both need one-on-one attention, something that can be difficult to receive at a childcare center.

“We wanted to be sure that whoever was working with the kids could notice and recognize if there were any medical challenges,” she said.

“We also wanted to be sure that someone could help teach them a little bit in a way that was unique to their needs.”

Posey parted ways with her nanny in 2019 due to cost, but afterward had issues with the childcare center she where enrolled her kids.

Teachers would often describe her son’s behaviors or responses as “behavioral issues” instead of attributing them to his needs. In one instance, she said, her son was written up for trying to “escape the classroom.”

“I’m a big fan of daycare facilities, but there are some real gaps in their knowledge of what certain kids need,” she said.

Posey said the twins, now five years old, are enrolled in pre-school where they participate in an individualized education program. With her job requiring her to travel more, she and her wife plan to hire a nanny for after school care in the near future.

“The reality is we could certainly use the help,” she said.

The national average in 2021 for nannies on Care.com was $17.34 per hour. Day care workers, on the other hand, averaged $12.40 an hour, according to the Bureau of Labor Statistics.

Better-paying nanny jobs are luring workers away from child care centers and preschools.

Charlotte has seen a 20% increase in new nannies, according to Emily Miller, owner of Charlotte’s Best Nanny Agency, who works to connect families with nannies in the Charlotte metro area.

“We have seen an uptick in people moving careers from teaching to daycare to preschool into nannying,” she said.

She said that some people make the career switch because of the pay. The average nanny hired through Charlotte’s Best is paid between $20 and $30 an hour.

Miller said the benefits of having help in-home has been enticing to many families.

“Having someone come to your house offers many families that flexibility that a group setting wouldn’t,” she said.

Millers also said the cost is also a big deciding factor for most families. Not every family can afford the in-home care.

Child care for infants averages $9,480 a year or nearly $800 a month, according to a study from the Economic Policy Institute. A private part-time nanny, paid at $20 per hour, could cost more than double that amount.

To make the choice more affordable, parents can use nanny share – when two or more families share one nanny –  making the price much cheaper, Miller said.

Loren Parker has found a long-term career in nannying.

She told QCity Metro that she makes around 52,000 a year as a part-time nanny with multiple families, working for them during the day and night.

Parker spent time working in childcare and the school system, but became a nanny in 2012 as a way to make extra money.

When she moved to Charlotte in 2018, she continued the part-time gig.

“It was just the quickest way to really solidify a good paying job quickly and there’s always a demand,” she said.

Parker said nannying during the pandemic had its ups and downs. The demand was high initially because child care centers were closed, but the need decreased because many families worked from home.

She said she prefers nannying as opposed to working at a school or center because she’s able to set her own pay.

It has now become her full-time job and she doesn’t plan to stop.

“I am fine nannying. I do have my master’s to fall back on, but for now, I’m fine,” she said. “It’s been beneficial enough for me to where I’m okay with it.”

Laura Hilla, director at the Goddard School of Concord – Highland Creek, doesn’t see the nanny service as competition. She sees it as a resource to help families.

Parents must apply for their children to get into the Goddard School, a nationwide childcare chain and the Concord location currently has a yearlong waitlist.

Hilla said many parents hire nannies while they wait to be enrolled.

“I see it as another opportunity for a family out there to be able to obtain child care that I know is so greatly needed,” she said.

On the other hand, some child care centers are experiencing staff shortages consistent with national labor trends.

Since the pandemic, Toliver went from 30 employees to 20, leading her to decrease the number of classes.

Without those classes, she is unable to accept 50 families who are looking to enroll.

Toliver understands that parents need childcare and will find a way to meet the need, even outside of traditional centers.

“You gotta go to work, you’re gonna find a neighbor or somebody to keep your children so that you can work,” she said.

Toliver said the rise in the flu may also be a concern for many parents.

“A lot of people just don’t bring their children back to daycare and schools because parents just don’t want their children out,” she said. “I can see pros and cons with that, if the child has a compromised immune system.”

“If the child has a compromised immune system, then keep them at home,” she said. “But they need to be exposed. They can build up some immunities.”

Daivonna Graves, who works in healthcare, has seen the effects Covid has on adults and children.

This made her even more fearful of sending her daughter to daycare.

“I have become extra afraid of germs,” she said. “Children that attend daycare are more likely to have more colds & illnesses throughout the year.”

Graves, who is currently pregnant with her second child, doesn’t plan to change her decision about having a nanny anytime soon.

”My children will not attend daycare,” she said.