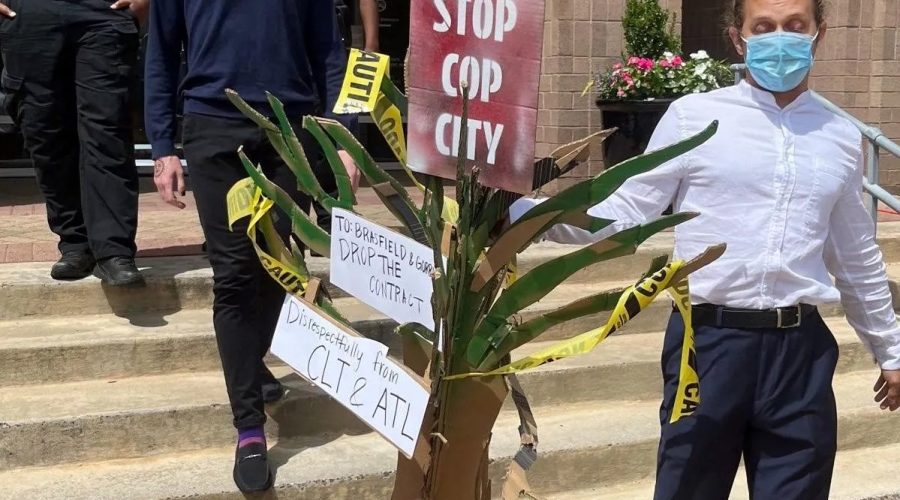 Demonstrators gathered Thursday outside the Charlotte office of Brasfield & Gorrie, one of the nation’s largest privately held construction firms, to protest a project more than 200 miles away, in Atlanta.

The Alabama-based company has a contract with the Atlanta Police Foundation to build a controversial police training center after clearing 150 acres of Atlanta’s South River Forest.

Demonstrators said they oppose the $90 million project — dubbed “Cop City” by its detractors — due to concerns about climate, police violence and gentrification.

“With the development of ‘Cop City,’ the oppression and suffering of marginalized people will continue,” they wrote in a joint press-release. “During a time when people’s right to bodily autonomy has been restricted, corporations and governments continue to impose their control over our future and voices.”

“It comes down to rights,” said Krysten Reilly of NoDa Tree Save. Reilly says that tree canopy is crucial to the urban environment. “It’s a public health concern and the community should have a say.”

In September of last year, the Atlanta City Council approved Ordinance-21-O-0367, which executed a lease agreement of at least 85 acres of Dekalb County green space to the Atlanta Police Foundation for the development of a “public safety training center,” projected to open at the end of next year.

The green space includes the South River, or Weelaunee, Forest. After more than 16 hours of public comment with 70% of resident callers against the proposal, and a survey showing that 98% of Atlanta residents oppose building the project, council members voted to allow the project to move forward.

The Atlanta Police Foundation (APF) is described in the ordinance as a nonprofit organization that “unites the business and philanthropic community with the Atlanta Police Department to make strides in public safety.”

“We’re protesting to maintain the Indigenous land,” said Gray Maddrey, a part of the Charlotte Metro Democratic Socialists of America. “[The forest] is an area where there are a lot of Black and low-income residents,” said Maddrey. The forest’s absence will cause the area to “lose a vast carbon-sink.”

In The Truth about the Atlanta Safety Training Center, uploaded in July of last year to the Atlanta Police Foundation website, the police foundation specifies 150 acres of the available 380-acre green space are to be used for the facility for “morale-boosting” and recruitment and retention. All 381 acres of the forest were previously recommended for use.

The plan for the Center includes a “mock-village” where trainees will experience immersive tactical situations in uninhabited buildings such as apartments, a hotel and a nightclub.

Opposed by many, the project has been dubbed “Cop City.” The bill totals $90 million dollars, $30 of which to be paid by the City of Atlanta. The remaining expense will fall on the police foundation.

In addition, Dekalb County signed over 40 acres to Blackhall Studios, a feature-film production company, to create one of the largest studios in the Southeastern United States.

History of the South River Forest

The South River Forest, or the Weelaunee Forest, is the ancestral homeland of the Muskogee Creek Native Americans. It provides the largest tree canopy of any major metropolitan area in North America. It is currently open to the public and is also a firing range for the Atlanta Police Department.

The forest wetlands filter rainwater and prevent flooding to the nearby neighborhoods. It is also one of the last breeding grounds for many amphibians in the region, as well as an important migration site for wading birds.

Shortly after Muskogee Creek land was colonized, the area was used as a plantation. During reconstruction, the area was reincarnated as a “prison farm” where inmates were forced to perform unpaid agricultural labor.

“We all need to know that all of our struggled are intertwined,” said Tai, a representative of SEAC Village. “These are the same companies that funded the removal of abortion rights,” she said. “What are they going to gain?”

Opposition to the project has brought unwanted attention to other companies involved in the contract.

In October, following Color of Change’s report, Coca-Cola stepped down from the police foundation’s board of trustees. This April, Reeves Young, a major construction company enlisted to fell trees, test soil and survey the area, pulled out of the contract.

Last month, windows at an office of Atlas Technical Consultants, owner of Long Engineering, was targeted by protesters.

held banners and chanted, “land back, don’t be wack, drop the fucking contract,” outside of the office building of Brasfield & Gorrie, among other businesses, at 521 East Monroe Street Thursday afternoon.