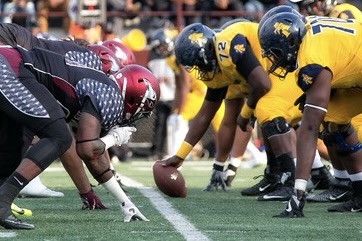 The biggest HBCU rivalry reaches another chapter on Saturday as N.C. Central faces its rival N.C. A&T in the 100th Aggie-Eagle Classic.

In addition to bragging rights, the winner will earn confidence going to into the start of the season.

Here’s my analysis and prediction.

After finishing second in the conference last season, the Eagles bring back a young team hungry to prove that last season’s success was no fluke.

Head Coach Trei Oliver, in his third season, has had time to develop his system. His team went on a three-game winning streak to end last season but were picked to finish second this year, behind South Carolina State, in MEAC preseason rankings.

Oliver’s defense, ranked second in the conference last season, will be a key piece to the Eagles’ success, but their junior quarterback Davius Richard will be a deciding factor in how far the team goes.

In 2021, NC A&T struggled in its first season in the Big South, but the team heads into the 2022 season as conference favorites.

The Aggies entered fall camp with unanswered questions on offense, starting with quarterback, so look for the defensive unit to lead the charge. That unit has impact players at every level, from defensive linemen to linebackers to secondary.

Linebacker Jacob Roberts (junior): In just his first season as a starter, Roberts has emerged as one of the best defensive players in the conference. The two-time all-conference player led the Aggies in tackles last season with 84 and will be a key clog in a tough Aggie defensive unit.

Defensive end Jermaine McDaniel: McDaniels returns to the field after a rough 2021 season ended with injuries. Despite playing only five games, he had four sacks. He will look to recreate his production from 2019, when he had 40 tackles (29 unassisted) with 12 tackles for loss and 7 ½ sacks.

Defensive back Karon Prunty (RS sophomore): A transfer from Kansas University, Prunty will have no trouble fitting into this Aggies defense. In 2020, as a freshman at Kansas, he started in nine games, holding opponents to a 38.5 completion percentage against him (seventh in the nation) and didn’t allow a single touchdown. He earned All-Big 12 honorable mention accolades and 247Sports True Freshman All-American honors.

Look for this game to be a defensive battle. The biggest concern remains in the Eagles’ offensive line that is made up of freshman and sophomores.

If this young unit can protect Richards, then the Eagles will have an advantage, but if not, things can get ugly very quickly.

The final score will come down to which offense makes the fewest mistakes.

Editor’s note: QCity Metro is committed to providing our readers with first-rate coverage of this year’s Aggie-Eagle Classic. To support our work, sign up for our limited-edition Aggie-Eagle newsletter and/or click here to make a donation.