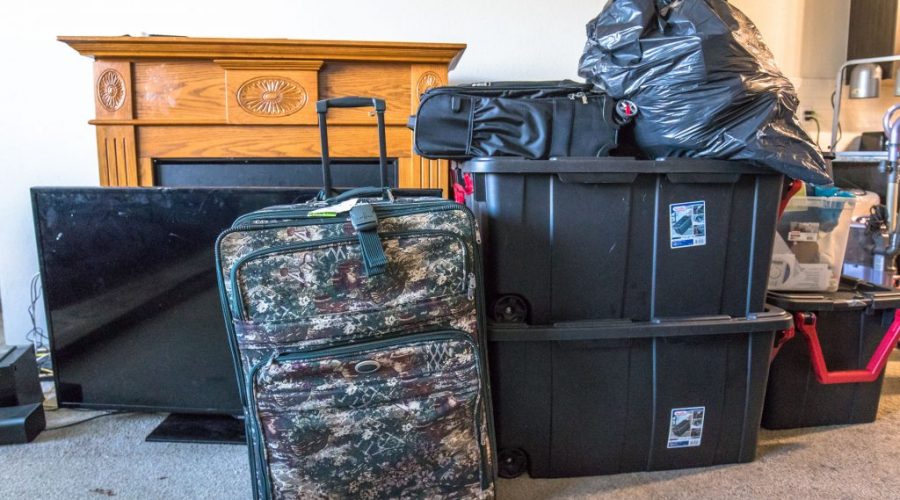 On a recent day at the Mecklenburg County Courthouse, people milled about the hallway, waiting for eviction hearings to start. Later, in a courtroom, a magistrate called a list of 10 names, answered only by silence. These were the names of tenants who were supposed to be in court that morning; they had not shown up.

Denise Chapman, 51, who requested to use her middle name, is a tenant who decided to skip her eviction hearing.

“I ain’t going to court because they won’t give us a place to stay,” Chapman said. “I am not saying you should take responsibility for me and my kids, but what I am saying is that there has got to be some more empathy in you.”

After being homeless for seven years with her kids and grandkids, Chapman found a stable source of income through cooking and eventually started her own food truck business, but the pandemic shut it down. She is now behind about $16,000 in rent. She reached out to RAMP CLT — the organization in charge of doling out rental and mortgage assistance in Mecklenburg County — for help, but said that she has gotten no response.

Chapman’s story is not unique. This is the reality for tenants in Mecklenburg County and throughout the United States. Many renters facing eviction do not appear in court for their hearings, which then leads to a default judgment: an automatic eviction. In North Carolina, renters can be locked out of their homes in a matter of weeks if they do not appear in court.

Reasons About for Absent Tenants

There are numerous reasons as to why tenants might not show up for their eviction hearings, said Juan Hernandez, a lawyer with the Charlotte Center for Legal Advocacy. Eviction notices could be taken off their doors or blown away by the wind; people might not understand the eviction process; unauthorized immigrants may worry their efforts to apply for legal status could be negatively affected; people might not be able to take off work or find childcare.

Since the Supreme Court ruled the Centers for Disease Control and Prevention did not have the authority to extend the federal eviction moratorium on August 26, more renters have been at risk of eviction, although eviction filings are still below historical levels. The CDC moratorium was put in place to limit overcrowding and prevent more people from experiencing homelessness as COVID-19 was spreading. With a shortage of rental properties and prices spiking for units around the country, tenants do not have many options for places to go.

Across the country, the number of eviction filings varies depending on the state and county. Jurisdictions that had local moratoria are still seeing lower levels of eviction filings, whereas the numbers are higher where the federal moratorium wasn’t enforced or there were no local moratoria, according to Emily Lemmerman, a research specialist at the Eviction Lab at Princeton University.

Landlords have been delayed in filing evictions in Mecklenburg County, said Kim Graham, the executive director of the Greater Charlotte Apartment Association. Additionally, the courts are still hearing fewer cases per day than before the pandemic to limit the number of people in a courtroom, a precaution in place due to COVID-19.

Those facing eviction are more likely to be women and racial minorities, as they have been disproportionately impacted economically by the pandemic, the Eviction Lab reports. These findings were true long before the pandemic as well.

Many of these renters vacate their properties as soon as they receive an eviction notice, even though tenants who do appear in court for their eviction hearings are more likely to receive help. Tenants who skip court typically move to different properties, decide to live with family, go to a homeless shelter or are homeless.

“I think people are afraid of the realities that they are in,” Hernandez said. “People think there is no defense, that they will be forced to be evicted anyways, so many people just leave.”

Tami Griffin, 48, is a tenant who was laid off from her job as an administrative assistant for a healthcare company at the beginning of the pandemic and was late with one payment in August. Now, her landlord will not take her payments. Unlike Chapman, however, she was able to attend her hearing.

“I have flexibility because I am unemployed due to COVID-19 and don’t have children,” Griffin said.

Legal experts also said confusion over how the moratorium worked led to tenants not appearing in court. Tenants may not have known that in order to qualify for the CDC eviction protection, they had to sign a statement confirming that their difficulty paying rent was related to COVID-19. As of recently, more tenants have begun showing up to court.

During the pandemic, the court’s mediation program was asked to assist tenants facing eviction, as opposed to just helping with pre-eviction-filing disputes.

The mediators assist tenants with their applications for rental assistance and facilitate discussions with the landlords.

Representatives have also been in courtrooms since the last week of August to advise magistrates about the status of tenants’ rental assistance applications in an effort to get eviction cases dismissed, said Mary Williams, the community relations manager with the dispute settlement program.

While Mecklenburg County has taken strides to address the increased levels of housing insecurity caused by the pandemic, it does not have a formal eviction diversion program in place like other cities in the United States.

In Philadelphia, the courts, legal aid, mediators and housing counselors — individuals trained to help renters and homeowners with housing questions — work together to mitigate the number of evictions filed.

The program in Philadelphia was intentionally set up to address the high rates of automatic evictions, said Rachel Garland, the managing attorney at Community Legal Services in Philadelphia. Prior to the establishment of their program, more than half of evictions in Philadelphia resulted in default judgments against tenants who did not come to their eviction hearings, according to Temple University’s Beasley School of Law.

Now, landlords must apply to rental assistance before they can file an eviction for nonpayment. Additionally, before a nonpayment eviction can be filed, tenants and landlords must go through mediation. Both tenants and landlords are notified by email and text messages to remind them about their mediation sessions. Housing counselors also call the tenants to discuss their options and explain the mediation process and potential outcomes prior to the sessions.

These steps have significantly lowered the number of eviction filings in Philadelphia. Garland reports that the city is at one-third of its pre-pandemic eviction filing levels.

“The outreach is so vital,” said Annette Rizzo, a former judge who spearheaded the program.

For tenants in Mecklenburg County, the main form of outreach is the eviction notice itself, which has a list of resources on it.

April Mack, a Mecklenburg County civil magistrate, said the court is sharing the information about resources, too.

“It is a great time right now for people who are involved with the eviction process to come to court to learn about these programs because we definitely tell them in court,” Mack said.

Chapman, the tenant who did not go to eviction court, thought that the court could not help her and decided to prepare for her move instead. Her belongings are in trash bags and boxes, with much of it being thrown away and some in storage. She said she will leave when the sheriff tells her to, but she does not know where she will go.

This story is part of I Can’t Afford to Live Here, a collaborative reporting project focused on solutions to the affordable housing crisis in Charlotte.

The Charlotte Journalism Collaborative is supported by the Local Media Project, an initiative launched by the Solutions Journalism Network with support from the Knight Foundation to strengthen and reinvigorate local media ecosystems.