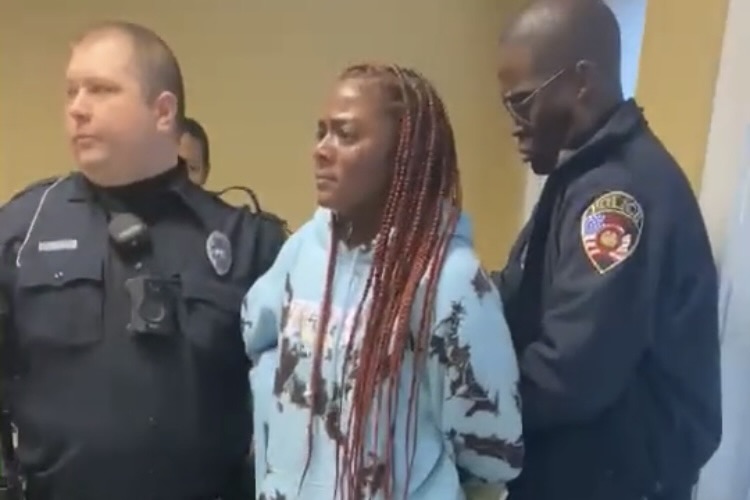 Winston-Salem State University faces backlash after a video surfaced of a student getting arrested inside a classroom following a verbal altercation with a teacher.

The video, posted Wednesday, has more than 3.4 million views on TikTok. It shows the student, identified as Leilla Hamoud, visibly upset and appearing to be in pain as officers put handcuffs on her.

“You’re getting me taken out of here because I won’t apologize?” Hamoud says to her teacher in the video. “You started yelling at me. You tried to embarrass me about my paper.”

In the video’s background, students can be heard criticizing the teacher for calling the police.

Hamoud was later charged with misdemeanor disorderly conduct, according to WFMY News, which cited a police report.

The disturbance happened in a classroom at Carolina Hall. The teacher, identified on social media as Cynthia Villagomez, is an assistant professor of history/Middle Eastern studies, according to the University’s website.

QCity Metro made efforts to contact Villagomez but was unsuccessful.

As the video spread across social platforms, some viewers posted comments demanding answers from the university. The hashtag #JusticeForLeilla was included in a number of post.

“Baby girl is literally scared… this is awful. As a grown woman, you don’t have to apologize to anyone! For their hurt feeling!,” another responded.

One person who identified as a WSSU alum tweeted that he wasn’t shocked by the video.

“The video that’s going viral at WSSU is not surprising. Professor Villagomez is NOT a good professor,” he said.

“An HBCU should be a safe space for black students. The professor & WSSU police need to be held accountable for their actions including dropping the charges,” another Twitter user said.

“They’re really trying to downplay this. The WSSU community and HBCU community in general will not let this horrific action be brushed under the rug,” someone else tweeted.

WSSU issued a statement on Wednesday:

“In accordance with law enforcement procedures, our officer’s first priority is to assess the situation and provide every opportunity for a positive resolution,” the statement said. “As situations escalate, their responsibility is to ensure the safety of the students, faculty, and staff members that are present.”

He added: “We know you want immediate answers; however, the speed of our processes does not match the speed of social media. Ultimately, we are committed to ensuring due diligence and fairness. We do ask for your patience as we must take the necessary time to ensure the safety of everyone involved. “

Hamoud’s side of the story

QCity Metro reached out to Hamoud for comment, but she did return our messages.

In an Instagram Live video on Wednesday, Hamoud told viewers that the argument stemmed from a group assignment she had to present that today.

According to the video, Villagomez, a history professor, emailed Hamoud six hours before the essay was due, requesting changes.

“I’m not going back and redoing this essay that took me two weeks,” Hamoud said on the video.

Hamoud went on to say that when she got to class to present with her group, Villagomez referenced the email Hamoud sent. Hamoud said she told the professor again that she would not make last-minute changes.

Villagomez left the classroom to consult with another teacher and returned with a campus police officer, Hamoud said.

Hamoud said that the officer, a Black man, did his best not to arrest her and tried to listen to both sides. Hamoud said a white officer later arrived and told the Black officer to handcuff her.

Hamoud said that when she asked why she was being arrested, the white officer told her it was for “RDO,” which she later learned is an abbreviation for resisting an officer.

“There was nothing to resist at that point…I just said ‘no’,” she said.

Both officers failed to read Hamoud her Miranda rights, she said.

The officers drove Hamoud to Forsyth Detention Center where, according to her video, she waited nearly two hours before she saw a judge who informed her that she was charged with a second-degree misdemeanor with a maximum penalty of 60 days in jail.

Because Hamoud did not have a previous arrest record, she said, the judge released her from custody. Hamoud said she informed the judge that her Miranda rights were not read to her and was told to tell her attorney.

“That’s all I needed to know, because it will be taken to my attorney,” Hamoud said in the video.

Hamoud said she was back home in Greensboro but described herself as being “heartbroken” by the situation.

“I did not expect that to happen,” she said.

Hamoud is scheduled to appear in court on January 25, according to WFMY News.